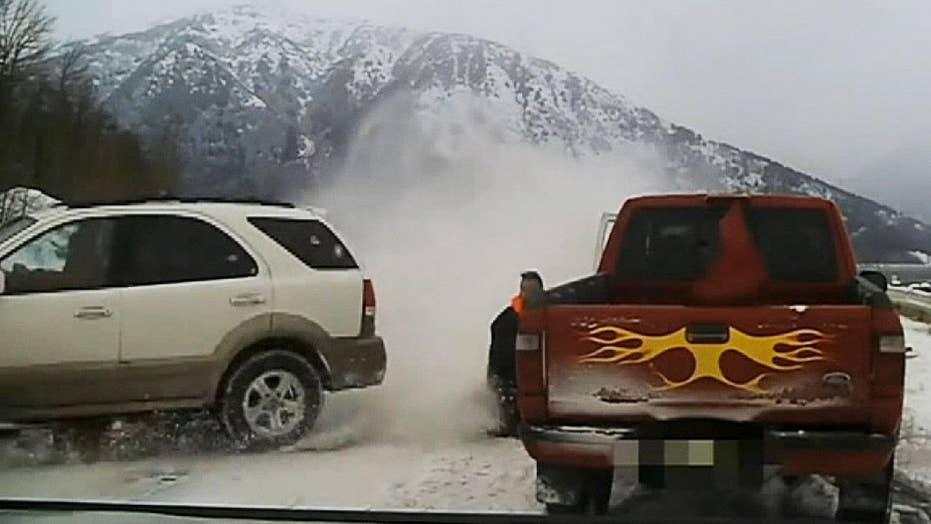 This was nothing short of a Christmas miracle.

A tow truck driver in Alaska came within inches of losing his life on Christmas Day after an SUV lost control on a snowy highway and almost struck him while he was attending to a disabled vehicle.

The Anchorage Police Department said on Facebook the close call happened on Seward Highway as Officer Stephen Busby and the tow truck driver were responding to the emergency.

In the video released by police, the tow truck driver is working on the vehicle as an SUV swerves around a bend and drifts into the oncoming traffic lane.

The vehicle then fishtails, kicking up a plume of snow as the SUV's rear wheels come within inches of the tow truck driver.

A tow truck driver was nearly struck by an SUV on Christmas Day in Alaska. (Anchorage Police Department)

"Had any tiny variable been slightly different in these 3 seconds, this could have been an incredibly tragic day," the department said. "We're grateful that nobody was hurt."

The tow truck driver was dusted with snow as the SUV missed him, and appeared to not notice the vehicle coming in his direction.

The driver then walks over to Officer Busby, who then appears to talk before looking back toward the direction the vehicle went.

Illinois State Police dashcam catches the heart-stopping moment when a truck slides off the road where state troopers were assisting a driver.

A police spokesperson told the Anchorage Daily News that the officer didn't pursue the SUV driver because his primary concern was making sure the tow truck driver was OK.

The Anchorage Police Department said the incident serves as a "critical reminder" of exercising extra caution behind the wheel while driving during winter when roads are covered in ice and snow.

"Slow down. Plan ahead. Your life and the lives of others depend on it," police said. "Be safe out there."