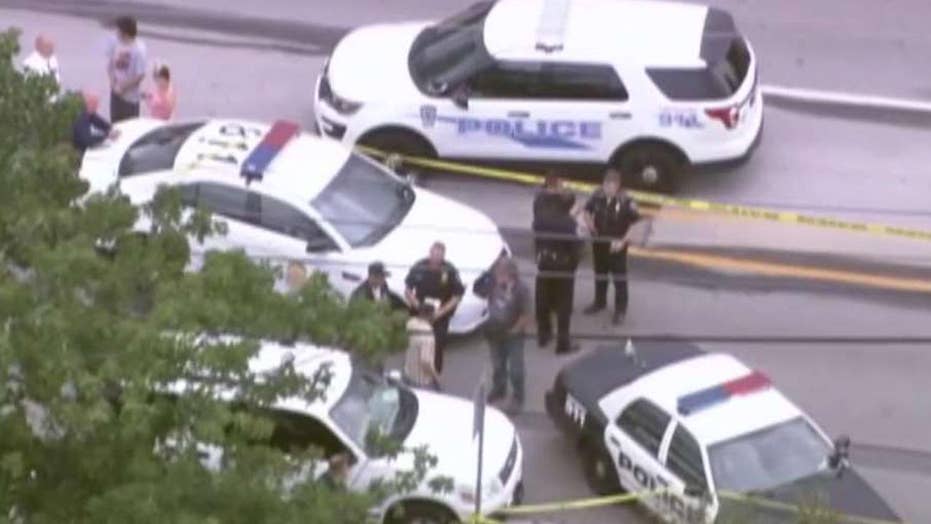 An Indiana volunteer police lieutenant responding to a traffic accident was gunned down Thursday by one of the injured occupants of an overturned car, officials said.

The officer was identified as Lt. Aaron Allan, 38, a six-year veteran of the Southport Police Department who had 20 years of law enforcement experience. Allan was the department's officer of the year in 2015 and was known by his nickname, "Teddy Bear," The Washington Post reported.

"It is with a heavy heart that I say this afternoon we lost a brother, Lt. Aaron Allan," SPD Chief Thomas Vaughn said. "Lieutenant Allan was a hard worker, and today was no different. He responded to a crash with urgency to preserve life. Tragically, his was lost."

Jason Brown, 28, was one of two suspects taken into custody in the shooting and is facing a preliminary murder charge, according to a police report obtained by FOX59. Though a motive was not immediately disclosed, Hendricks County court records reviewed by The Indianapolis Star showed Brown had been convicted of misdemeanor marijuana possession in 2014 and was sentenced to 30 days in jail. The Indianapolis native, who remained hospitalized Friday in good condition, also had been issued three traffic tickets in Marion County and another in Greene County since 2009.

Allan was a member of the department's robust volunteer service, who work "with full police powers but without pay," according to the Indy Star.

On Thursday, Allan, who had reportedly dreamed of becoming an officer since he was 5 years old, was called to a seemingly innocuous car accident in southern Marion County around 3 p.m.

Allan was at the scene with a second officer, from the Homecroft Police Department, and an off-duty Johnson County Sheriff's deputy. When Allan approached the flipped car, one of the two occupants started shooting, officials said.

“We heard a lot of sirens. We were unsure what was going on,” witness Ciarra Williams told FOX 59. Others pedestrians near the scene reported being startled by the sound of gunshots.

Betsy Strohm, a resident of the Southport neighborhood, called the shooting death "devastating."

"This never should happen to any police officer, especially when they're giving their time to help our community," Strohm told the Indy Star. "This is very, very sad."

“Today, Lt. Aaron Allan was doing what officers do each day: responding to the scene of an accident to help someone in their time of need,” Indianapolis Mayor Joe Hogsett tweeted. “His death is a shocking and tragic reminder of the difficult, often dangerous work of police officers across Marion County.”

Allan was the second Indiana police officer to die Thursday.

Deputy Chief James "Jim" Waters, 48, died after he was involved in a serious car crash during the weekend. Waters was traveling eastbound on the interstate when a semi hit his vehicle from behind, fire officials told FOX 59.