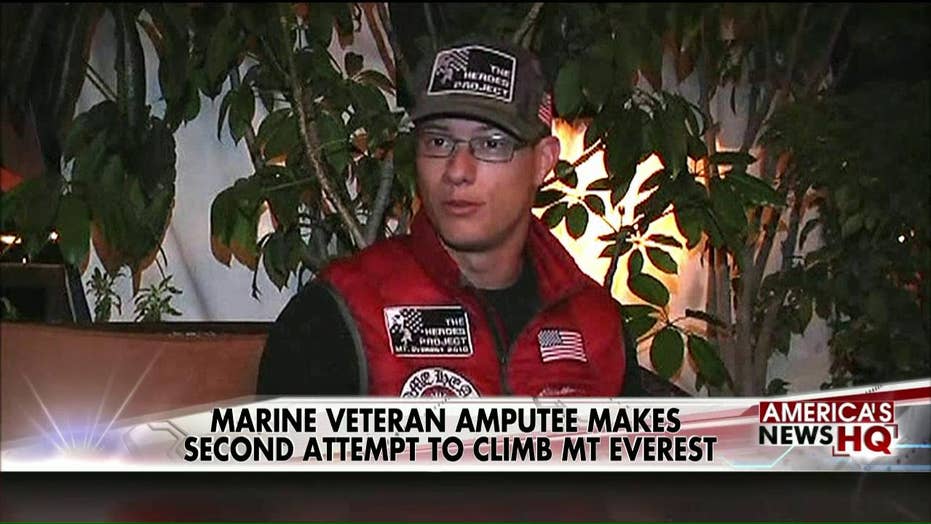 After trying twice to reach the top of Mount Everest, an Afghanistan war veteran and Idaho native became the first combat-amputee veteran to summit the world's highest mountain Thursday.

Charlie Linville, 30, twice tried to climb Mount Everest but never made it due to devastating natural disasters on and near the world's highest mountain.

Linville -- whose climbs have been sponsored by The Heroes Project, a nonprofit organization that helps wounded veterans -- finally reached the summit Thursday, according to the organization. Linville lost his lower leg in combat while serving in Afghanistan.

"The team is healthy and safe and currently descending the mountain," the Heroes Project said in a statement.

The team that included Linville arrived at Everest Basecamp on April 17, and encountered delays from a snowstorm before arriving at Advanced Basecamp (ABC) on May 2, according to the group.

Once at the Advanced Basecamp, the group focused on acclimation training to get their bodies adjusted to the conditions at 21,300 feet before starting their climb earlier this week. Eventually, the climbing group began their summit push in the late evening on Wednesday.

In January, Linville told the Idaho Statesman newspaper he hoped his climb would serve as in inspiration to others.

"I really found a passion to show people that anything's possible, no matter what you do," he sid.

"I hope to inspire other people and get them to get up and accomplish whatever they want to do in their life," he told the newspaper.

Staff Sgt. Linville, who joined the Marine Corps two years after high school, signed up to become an Explosive Ordnance Disposal Technician, disarming improvised explosive devices, or IEDs, according to the paper.

On Jan. 20, 2011, Linville and his team were tasked with a routine detonation -- not immediately realizing there was an IED hidden beneath another one.

“I remember stepping on it, I remember the distorted boom in my ears, and being out of it and waking up," Linville told the Statesman.

“I can’t say why — my bomb didn’t fully detonate. If it had, I would have been a triple amputee and I would have died," he said.

Linville lost his right leg below the knee. His quest to climb the 22,000-foot peak began while recovering in his hospital bed.

"I got blown up and severely wounded and kind of sat in a hospital bed and couldn't figure out what I was going to do with this rest of my life and what could this body that I now have do," he told the newspaper. "And the answer kind of found me. Hey, go try to climb the world's tallest mountain and see if you can be successful."

Linville first attempted to climb Everest in 2014 but his efforts were thwarted when when an avalanche ripped through the Khumbu Icefall, killing 16 Nepalese guides and forcing officials at the time to close the mountain to climbers, according to the newspaper.

Shortly before Linville and his team tried to make the trek the following year, a 7.8 magnitude earthquake rocked Nepal, killing almost 2,000 people. The quake triggered avalanches on the mountain, which was once again closed to climbers.

Linville told the Idaho Statesman he hoped to  inspire others around the world who face physical and emotional challenges.

"If it just changes one person’s life, then all the misery, everything that has come with it, will be worth it. Maybe I’ll never know if it was worth it. I guess I’ll go on living my life thinking that it was," he told the paper.