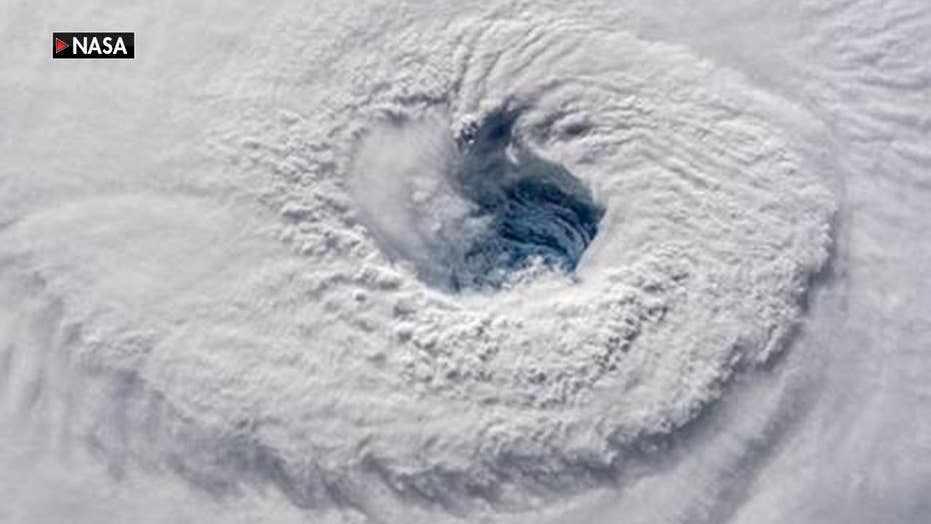 Watch the latest videos from the Carolinas as Hurricane Florence makes landfall and leaves a path of destruction and hundreds of thousands without power.

Slow-moving and powerful Hurricane Florence is “wreaking havoc” across the Carolinas as the Category 1 storm continues to dump massive amounts of rain that could trigger catastrophic floods inland.

Once a Category 4 hurricane, a weakened but still-dangerous Florence is now making its way south along the Carolina coast at about 6 mph with sustained winds of 80 mph – pushing life-threatening storm surges miles inland, ripping down parts of buildings and knocking out power to more than a half-million homes and businesses early Friday.

Gov. Roy Cooper said Friday that Florence is "wreaking havoc," and he expressed concern that "whole communities" could be wiped away. He said parts of the state have seen storm surges as high as 10 feet.

"Hurricane Florence is powerful, slow and relentless," he said. "It's an uninvited brute who doesn't want to leave."

Wilmington Police confirmed that a mother and infant were killed during the storm after a tree fell on their home. The father sustained injuries and was transported to New Hanover Regional Medical Center in Wilmington for medical care, police said.

Earlier Friday, the Wilmington Police tweeted that they were responding.

In a separate occurrence on Friday morning, a medical-related fatality occurred in the midst of the storm, according to Pender County Public Information Officer Tammy Proctor. The deceased was an unidentified woman whom emergency responders could not reach due to a downed tree, Proctor said.

At a hotel in Jacksonville, North Carolina, about 60 miles northwest of Wilmington – about 70 occupants, including an infant and other children, were evacuated from the Triangle Motor Inn after hurricane-force winds collapsed portions of the hotel’s roof.

Elsewhere hundreds more had to be rescued from rising waters, with some residents having to climb up to their roofs to escape danger.

The center of Florence made technical landfall about 7:15 a.m. on Friday near Wrightsville Beach. As of 2 p.m., the storm was about 35 miles west-southwest of Wilmington,  and about 35 miles east-northeast of Myrtle Beach, S.C

Florence's storm surge and the prospect of 1 to 3½ feet of rain were considered a bigger threat than its winds, which dropped off from an alarming 140 mph earlier in the week. Forecasters said catastrophic freshwater flooding is expected well inland over the next few days as Florence crawls westward across the Carolinas all weekend.

Forecasters said the terrifying onslaught would last for several hours, because Florence was barely moving along and still drawing energy from the ocean. They said “catastrophic” freshwater flooding was expected along waterways throughout the Carolinas.

Officials said Friday they expected the same amount of rainfall seen during Hurricane Floyd in 1999. However, instead of rainfall spread over 14 days, Florence will dump it all in three days.

Florida man with US flag takes on Hurricane Florence

“Twenty-four to 36 hours remain of significant threat from heavy rain and heavy surge,” said Jeff Byard, an administrator with the Federal Emergency Management Agency. "Those citizens who did not heed evacuation warnings, it’s time to stay where you are, do the best that you can to protect yourself."

Preparing for the worst, about 9,700 National Guard troops and civilians were deployed with high-water vehicles, helicopters and boats that could be used to pluck people from the floodwaters.

Duke Energy said in a tweet that they anticipate between 1 to 3 million outages across the Carolinas, adding that restoration in the hardest-hit communities could take weeks.

The National Hurricane Center said Florence will eventually make a right hook to the northeast over the southern Appalachians, moving into the Mid-Atlantic states and New England as a tropical depression by the middle of next week.

Soon after Florence made landfall, President Trump touted the work from FEMA and first responders.

“Incredible job being done by FEMA, First Responders, Law Enforcement and all. Thank you!” he wrote.

Officials said some 1.7 million people in the Carolinas and Virginia were warned to evacuate, but it's unclear how many did. The homes of about 10 million were under watches or warnings for the hurricane or tropical storm conditions.