Fox News correspondent Mike Tobin provides the latest updates from the ground in Highland Park, IL, as police search for the suspect in 4th of July parade shooting.

"During the attack, Crimo was dressed in women's clothing," in order to "conceal his facial tattoos and his identity," Christopher Covelli, a spokesperson for the Lake County Major Crime Task Force, said at a news briefing Tuesday. Covelli said Crimo fired "more than 70 rounds," then blended into the crowd. Covelli said there are no indications anyone else was involved in the shooting.

Authorities had not yet determined a motive for Crimo, Covelli added.

Highland Park Mayor Nancy Rotering told NBC's "Today Show" that she was Crimo's cub scout leader when he was a child, and said she is waiting for prosecutors to file charges against him for the shooting. She further said that the gun that was used in the shooting was obtained legally.

Paul Crimo, the suspected shooter's uncle, told Fox 32 that there were "no warning signs" suggesting that the young man would carry out the attack. The uncle also described his nephew as "a real quiet kid."

An FBI wanted poster describes Robert E. Crimo III as a thin White male with brown eyes and neck-length brown hair, weighing 120 pounds. The poster also describes his tattoos: "four tally marks with a line through them on his right cheek, red roses and green leaves on his neck, and cursive script above his left eyebrow."

The poster describes him as "armed and dangerous."

Crimo is also known as "Awake the Rapper."

Robert E. Crimo, 22, has been identified as a person of interest in the July 4th parade attack in Highland Park, Illinois in which at least six people were killed.  (Highland Park Police Department)

Crimo began uploading his music to the internet at age 11, but first gained traction with his 2016 track "By The Pond" featuring Atlas, according to IMDB. His estimated net worth is "$100 thousand."

Crimo is the son of Bob Crimo, president at Bob's Pantry & Deli in Highland Park. According to his Facebook account, the father ran for Highland Park mayor in 2020.

The rapper released a cryptic track called "Are You Awake" on Oct. 15, 2021. The track appears to suggest that Crimo was planning a life-defining act beyond his ability to stop. The video includes drawings of a man aiming a rifle at another person.

The video also includes an image of a newspaper clipping about Lee Harvey Oswald, who assassinated President John F. Kennedy, and another image of a victim shot with blood spraying from the body.

"Like a sleepwalker, I am unable to stop and think," he says in the track. "My actions will be valiant and my thought is unnecessary. I know what I have to do, I know what's in it, not only for me, but for everyone else."

"There is no past or future, just the now," he adds. "It is more abstract than I can ever imagine. I can feel the atmosphere pushing me in. It's unstoppable, like a wave pulling me under, I can't breathe without it." 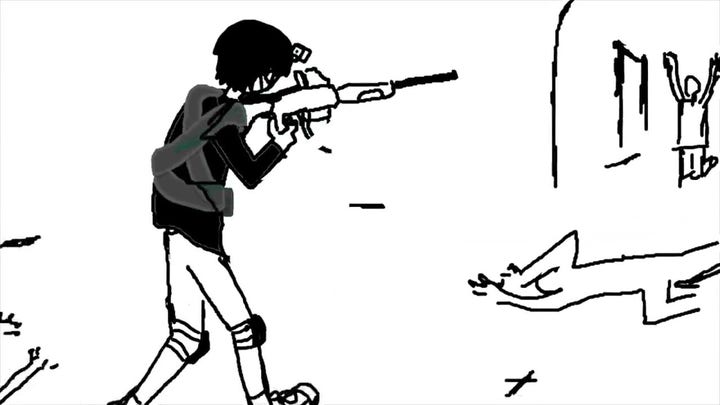 "I need to leave now, I need to just do it. It is my destiny, everything has led up to this," Crimo says. "Nothing can stop me, not even myself. Is there such thing as free will, or has this been planned out, like a cosmic recipe?"