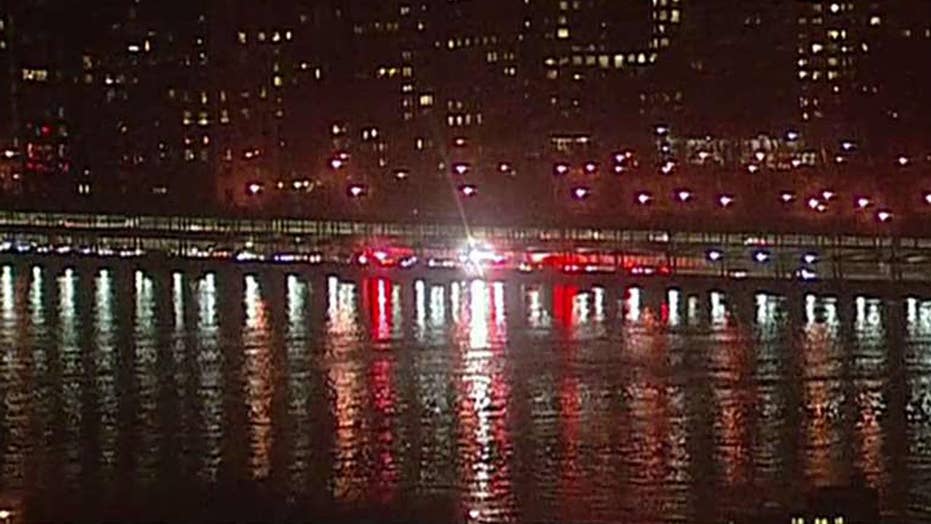 Bryan Llenas reports from the scene of the crash.

At least two people were killed and three were in critical condition Sunday night after a helicopter with six people aboard crashed in New York City's East River, officials said.

The chopper's pilot managed to free himself, while two people were declared dead at the scene of the crash, NYPD Commissioner James O'Neill said at a news conference. Rescuers pulled three other people from the water and rushed them to nearby hospitals.

Two of the critical victims were sent to New York's Bellevue Hospital with no heartbeat and were not expected to survive, a source told Fox News. The third critical victim was rushed to NYU Langone Hospital.

The group, which officials said was flying as part of a Liberty Helicopters tour, was on the private Eurocopter AS350 for a photo shoot when it crashed around 7 p.m. Officials said the water Sunday night was frigid, with temperatures below 40 degrees.

It was not immediately clear what caused the crash, but the National Transportation Safety Board (NTSB) and the Federal Aviation Administration (FAA) planned to investigate.

FDNY Commissioner Daniel Nigro said rescue divers pulled five people — who were tightly harnessed inside — from the chopper, which was "upside down and completely submerged."

One witness told the New York Post she watched the crash unfold from her apartment window and "immediately thought someone was in there and not going to live."

“By the time we got out here, we couldn’t see [the helicopter]," Mary Lee told the Post. "It was under water.”

Another witness, Arineh Nazarian, described seeing the helicopter crash while she and others were eating dinner.

"We noticed a red helicopter going full speed towards the water," Nazarian told WABC. "It almost looked very surreal and next thing we know it's approaching the water slowly and then it just completely crashed and then sunk. Immediate reaction was to call 911."