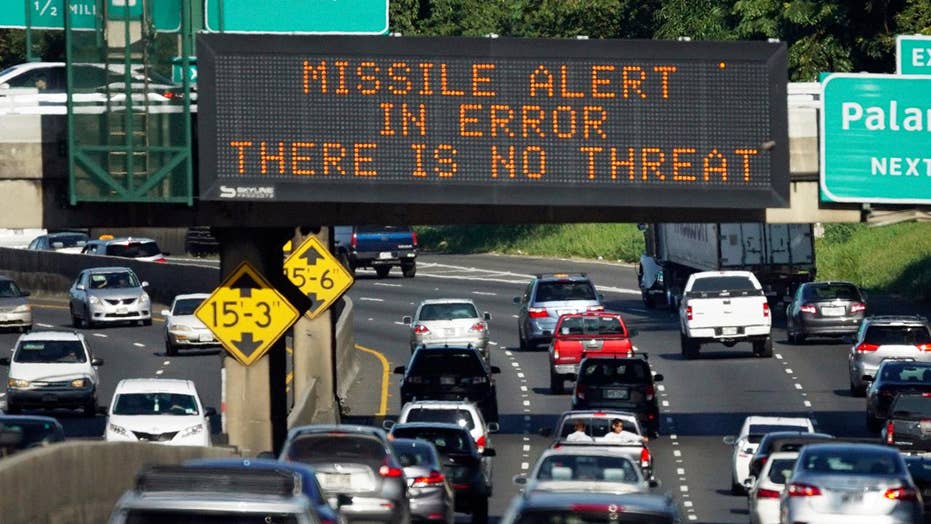 Adam Housley reports on the findings from the FCC's preliminary investigation into the Hawaii incident.

The head of Hawaii's Emergency Management Agency has resigned and the employee who issued a ballistic missile alert to residents -- causing mass panic for nearly 40 minutes earlier this month -- has been terminated, officials said.

One employee also resigned prior to disciplinary actions being taken and authorities are in the process of suspending another worker without pay, Logan said.

It was reported earlier that the employee intentionally sent the message thinking the island was being attacked, the FCC said in a stunning reversal after officials had insisted the alert was the result of a mistaken keystroke.

Vern Miyagi, who oversaw the Hawaii Emergency Management Agency before stepping down on Tuesday, said in an earlier news conference the worker who pressed the alert button “feels bad.”

Miyago added, “This guy feels bad, right. He's not doing this on purpose - it was a mistake on his part and he feels terrible about it.”

The alert was sent to people in Hawaii on Jan. 13 and caused mass panic and fear.

During the investigation, Oliveira said the employee, who had worked at the agency for more than 10 years, had a history of confusing drills and real-world events. In fact, the worker had made similar mistakes twice before, officials said.

In a written statement, the employee, who was not identified, said he believed there was a real emergency on Jan. 13 after hearing a recording that stated “THIS IS NOT A DRILL.” But the employee did not hear the first half of the message that stated “EXERCISE, EXERCISE, EXERCISE,” the FCC said in its preliminary report Tuesday. Though the recording also ended with the “EXERCISE” message, the officer did not hear it.

“While other warning officers understand that this is a drill, the warning officer at the alert origination terminal claimed to believe, in a written statement provided to HI-EMA [Emergency Management Agency] that this was a real emergency, not a drill,” the FCC said.

The language of the alert message reportedly strayed from typical scripts, although the recording ended with the "exercise" note, Oliveira said.

The employee followed emergency protocol and transmitted the “live incoming ballistic missile alert to the State of Hawaii,” selecting “yes” when reaching a page asking: “Are you sure that you want to send this Alert?”

The FCC said the incident was caused by a “miscommunication” during a shift change between the overnight and day crews. Three other officers reported hearing the “exercise” portion of the message.

After the mistake was realized, the employee reportedly “froze” and “seemed confused,” forcing another worker to take over and send a correction, Oliveira said.

The FCC said Hawaii officials were conducting an “atypical number of no-notice drills” that increased the chances of a mistake happening. The organization blamed the state’s flawed system, including how the alert software failed to differentiate between testing and live production environments, for the error. The report added the Hawaii agency wasn’t well equipped to send out a correction and the delay to send one made the mistake even worse.

“I do want to say it is astounding that no one was hurt in this accident,” FCC Commissioner Mike O'Reilly said. “This could have been a catastrophe.”

Following his investigation, Oliveira recommended a number of improvements on the system including a revised checklist to standardize the process of conducting drills and installing a computer process that would immediately send out an “alert cancellation,” the latter of which has been instituted already, he said.

The emergency alert that was sent on Jan. 13 about 8:07 a.m. local time read: “BALLISTIC MISSILE THREAT INBOUND TO HAWAII. SEEK IMMEDIATE SHELTER. THIS IS NOT A DRILL.”

By 8:20 a.m., Hawaii EMA tweeted there was “NO missile threat” to the state, but failed to send a follow-up phone alert for another 38 minutes, causing mass panic among people who weren’t able to check social media.

The FCC said Hawaii Emergency Agency has taken steps to update its system and create new policies to prevent another false alert. Agency supervisors will be required to receive prior warnings before a drill. Two officers will also be assigned to transmit and validate every alert and test before it is sent.