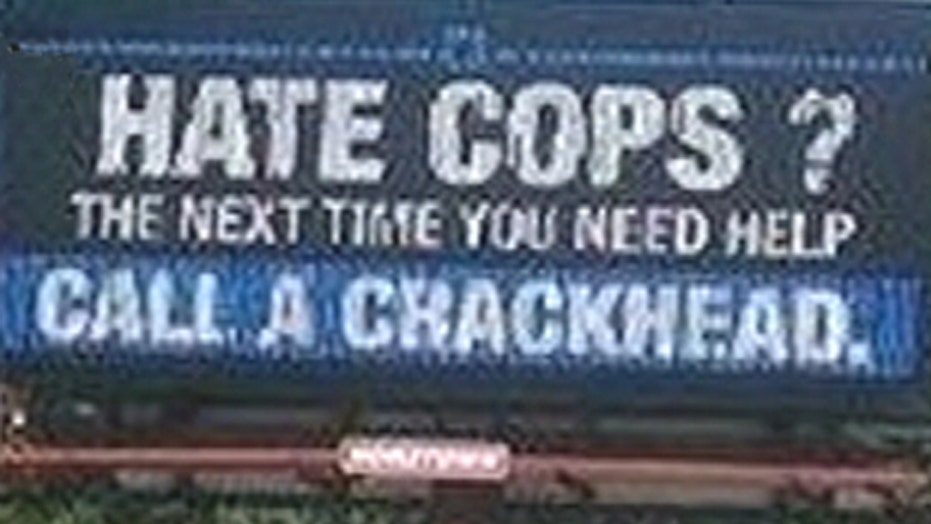 A billboard in Indiana has caused some controversy in the wake of the high-profile police killings and officer-involved shooting deaths of African-American men.

The electronic billboard in Muncie caught the eyes of plenty of people around the town Saturday and one person described it as “vulgar” and “discriminatory.” It read “Hate cops? The next time you need help call a crackhead.”

Megan Thomas told The Star Press on Sunday that she noticed the sign while walking with her niece. She said she was offended by the message, which she alleged was "vulgar, discriminatory to many different classes of people in our city.” She said it also seemed to have been up ahead of a police brutality protest.

"I was very ashamed that something so dividing was present in Muncie," she added.

Thomas shared the photo on Facebook and drew a ton of positive and negative responses. She said by the early evening Saturday the message was out of the rotation.

The billboard is located in the parking lot of a liquor store in Muncie. Chris Johnson, the owner of the store, told the paper that he called the billboard company to tell them that he was hearing complaints about the messaging and he was told it would be taken down immediately and reworded.

Johnson said he was berated by complaints and told the paper that he didn’t hear from anyone about the message on the sign before the controversy unfolded.

Muncie police Sgt. Chris Kirby said Saturday in a Facebook message that Muncie Liquors "had absolutely nothing to do" with the billboard message nor did any police in the town.

The people behind the billboard have yet to come forward.