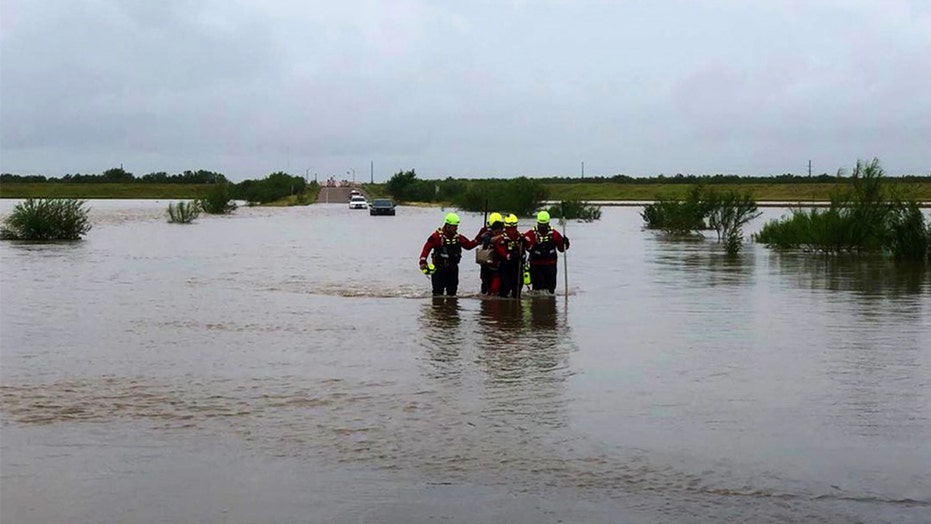 Devastating flooding was reported in parts of northern Mexico as the remnants of Hurricane Hanna moved across the region on Monday while water rescues continue in parts of South Texas.

As the storm meandered over the Rio Grande River Valley, parts of South Texas and Northern Mexico saw up to 16 inches of rain, triggering flash flooding.

Officials reported two people died in the northern Mexican city of Ramos Arispe, near Monterrey, after torrents of water unleashed by Hanna swept their vehicle away.

Video from Monterrey showed water rushing down streets after heavy rains fell in the area.

Three people were reported missing in Monterrey and three more were missing in the border city of Reynosa, across from McAllen, Texas, according to Mexico’s national civil defense office.

High winds from Hanna also damaged the hospital in Monterrey, causing some of the facade and letters on a sign to fall off.

In Texas, heavy rain left areas of Hidalgo County flooded on Monday. Aerial video shows the extent of flooding in the area.

The city of McAllen said Tuesday that flooding was still happening, with some rescues reported and roadways covered in water.

More than 48,00 homes and businesses in South Texas remained without power by Tuesday, according to power outage-tracking website poweroutage.us.

Cameron County Judge Eddie Treviño Jr., the county’s top elected official, said there were reports of at least 150 flooded homes, and some roadways were still impassable due to high water, but for the most part, the county was doing well.

“I think we’re very fortunate the storm did not bring major, major flooding and no loss of life,” he said.

In the city of Mission, a Border Patrol employee used his personal military truck to help evacuate 120 residents.

Texas Gov. Greg Abbott said the state was sending additional testing supplies and hospital personnel to South Texas communities impacted by Hanna to ensure the storm doesn’t exacerbate the spread of coronavirus in the area.

“The spread of COVID can be far more deadly than the damage caused by the storm,” Abbott said on KRGV-TV. He planned to tour damaged areas Tuesday.

Border communities hit by Hanna were already strained by COVID-19 cases — with some patients being airlifted to larger cities.

"We’re in a dire situation,” Rio Grande City Mayor Joel Villarreal told the Associated Press. “If we continue on the same trajectory, countless more lives will be lost.”

Texas health officials on Monday revised their data collection on COVID-19 deaths, which resulted in nearly 700 more fatalities than were previously reported.