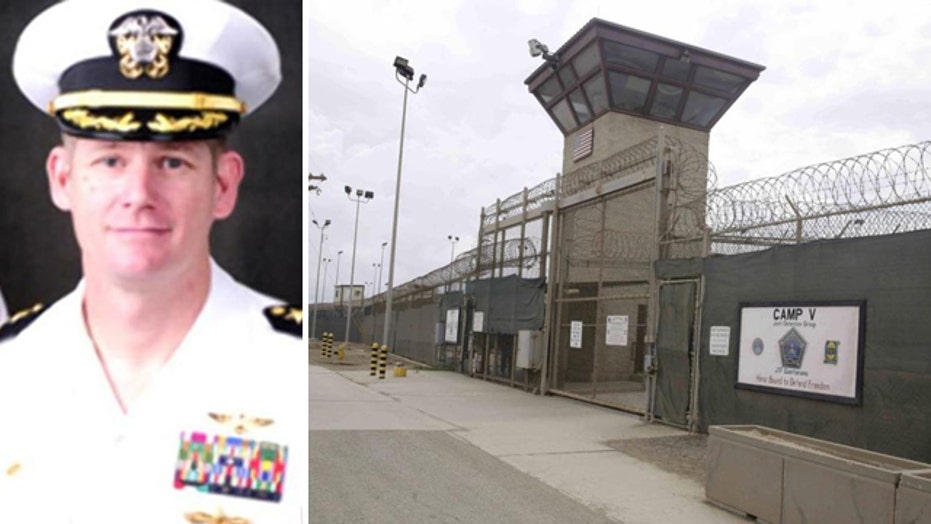 Capt. John Nettleton is under investigation in connection to an alleged affair with a woman whose husband was found dead earlier this month

The commanding officer of the Navy base at Guantanamo Bay was relieved of duty Wednesday amid an investigation that reportedly involves an affair with a civilian and the death of her husband.

Capt. John R. Nettleton has been temporarily reassigned to the staff of Commander, Navy Region Southeast in Jacksonville, and replaced on an acting basis by Capt. Scott Gray, the chief of staff of that installation, the Navy said in a statement that attributed the move to "loss of confidence in Nettleton's ability to command."

"Due to an ongoing NCIS investigation, it is not appropriate for the Navy to provide additional details concerning the relief," the statement continued.

The Navy did not provide details on why Nettleton, whose tenure as commanding officer at Guantanamo Bay, also known as Gitmo, began in June 2012, was relieved, but the involvement of the Naval Criminal Investigative Service is significant. Earlier Wednesday, The Associated Press, citing U.S. officials, said Nettleton is under investigation in connection with the death of Christopher Tur, who was found dead in the waters west of the base by the Coast Guard on Jan. 11.

The officials spoke on condition of anonymity because they weren't authorized to discuss the ongoing investigation.

Tur, a civilian, had been reported missing by his wife, also a civilian, the day before his body was discovered, officials said.

Officials told The Associated Press the alleged affair between Nettleton and Tur's wife was discovered during the course of the Naval Criminal Investigative Service's investigation into his death. Officials did not provide any details on the cause of Tur's death.

Nettleton has served as commander of the naval station, but the job has no role in the operation of the Guantanamo Bay detention center, which is located on the base and run by a joint task force.

U.S. officials said that Tur worked at the Navy Exchange on the base and that his wife is the director of the Navy Fleet and Family Services Center. They arrived on the base in 2011.