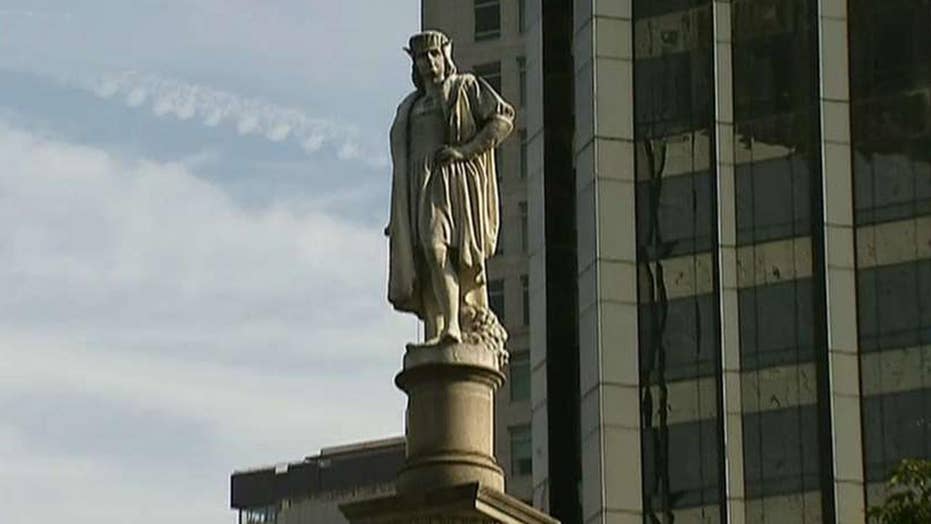 An organization that promotes and celebrates Christopher Columbus is pushing back against growing calls for the removal of statues of the famed explorer.

The National Christopher Columbus Association has launched a website, TruthAboutColumbus.com, to, as it puts it, "separate fact from fiction" about the Italian explorer. The group's leaders say Columbus is an undeserving target of a movement to by the extreme left faction known as Antifa to discredit historical figures it accuses of being linked to white supremacy.

"Up to now, the campaign of flawed history and misinformation against Columbus has been allowed to proceed with barely any pushback," Patrick Korten, one of the association’s board of directors, said in a statement.

“TruthAboutColumbus.com will help set Columbus’s record straight and serve as a reminder that ... the majority of Americans support celebrating Columbus and his key role in our history.”

The NCCA notes that Columbus himself was targeted by hate groups such as the Klu Klux Klan, which disparaged Italian-Americans and Catholics, and says groups like Antifa "are picking up where the KKK left off,” said Korten.

"Americans need to recognize that this attempt to destroy one of the great figures in our national experience is part of a shameful racist tradition," said Korten.

The NCCA says TruthAboutColumbus.com does not seek to deify Columbus, but it does urge the public to recognize the explorer's achievements and noble intentions.

"Neither a perfect man, nor the historic villain that recent critics have sought to make him, Christopher Columbus was actually a man ahead of his time whose vision and discovery changed the course of world history by connecting the peoples of the world for the first time," the website says. "Columbus has been outrageously slandered and falsely accused of the crimes of others. The record shows he actually sought to treat the natives with respect and restrain mistreatment against them."

Historians credit Columbus with introducing wheat, coffee, sugar and European-bred horses to the New World, while introducting Europeans to maize, potatoes and tomatoes. But Columbus has also been accused of killing and enslaving native populations he encountered, and his sailors have been blamed for introducing untreatable diseases that caused many more deaths.