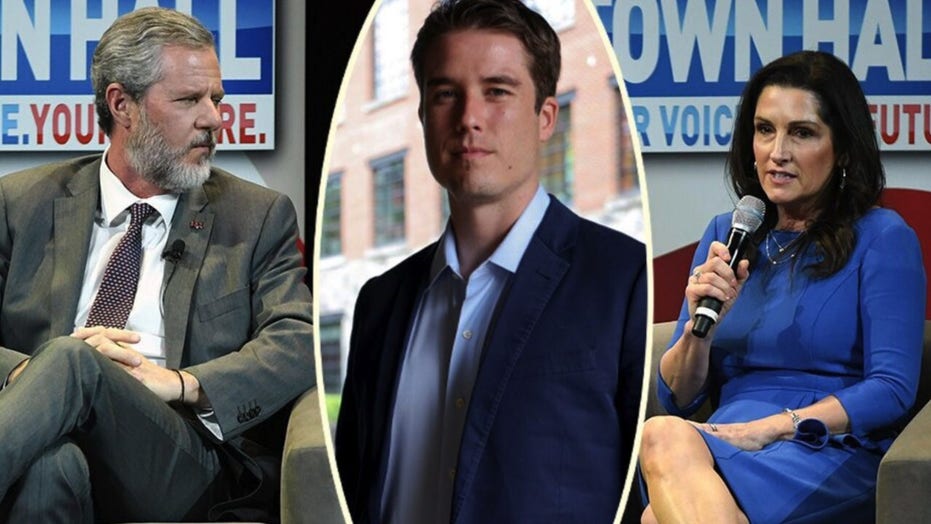 A former Miami pool boy is calling former Liberty University President Jerry Falwell Jr. a ‘predator’ after he alleges Falwell sent him a nude photo of a student exposing herself and had participated in three-way video calls with him and his wife.

EXCLUSIVE: Jerry Falwell Jr.'s days as a role model for students at Liberty University ended long before his bad behavior and debauchery spilled out into the public in a tawdry scandal that has left the conservative school his father founded reeling.

While much of the world saw a rising power in the evangelical world and a scion whose support and counsel were coveted by conservative politicians, those closer to his Lynchburg, Va., base of operations knew there was another side to the 58-year-old millionaire. In the rolling foothills of the Blue Ridge Mountains, where he helped turn his father's vision into a juggernaut, it was long an open secret that Falwell had a problem with boundaries.

It took a former Miami pool boy to reveal the disturbing flaws that have brought Falwell down.

"I was afraid for a long time and was constantly reminded by the Falwells of how they would come after me if I spoke the truth, which is why it took so long to speak up," Giancarlo Granda told Fox News in an exclusive interview.

Jerry Falwell Jr. and his wife Becki met and befriended Granda when he was a 20-year-old college student working as a pool attendant at the 5-star Fontainebleau Miami Beach hotel. What allegedly followed was seen as lurid by some, but jaw-dropping hypocrisy for the first family of evangelical education.

"Becki [Falwell] approached me and invited me back to their hotel room to have sex while Jerry watched," Granda said. "After that night, Becki actively pursued me."

The chance meeting would lead to a years-long affair and a he-said, they-said saga between Granda and the power couple that led to the August resignation of Falwell as president of America's largest evangelical university.

Since the scandal broke last month, Granda claims the Falwells "have been relentlessly harassing me and people close to me," and said Falwell will do whatever it takes to make sure he doesn't spill any more secrets. While the alleged threats and intimidation tactics might have worked in the past, Granda said he's had enough and wants to come clean.

He has shared text messages, emails and photos with Fox News that appear to back up his allegations and, at the very least, show the Falwells breaking Liberty's code of conduct on multiple occasions.

"Their lavish lifestyle consisted of heavy drinking and going to nightclubs, which is strictly prohibited by the honor code that they expect everyone else to follow," Granda said, adding that Falwell didn't believe Liberty's rules applied to him and would often use his influence to have stories killed and rumors squashed.

In 2019, Politico published a piece that called out Falwell for a trip to Miami's WALL nightclub. Falwell vehemently denied visiting the Miami Beach dance club on July 19, 2014, and claimed any images with him in it were "Photoshopped."

A day later, Seth Browarnik, the owner of World Red Eye, a Miami-based photography company that documents the city's nightlife, searched his archives and found multiple unpublished pictures from the evening where several members of the Falwell family are seen in the club, including Falwell, Becki, sons Trey and Wesley, and Trey's wife, Sarah. In one of the images, Falwell is in the middle of the dance floor surrounded by people. In two others, the Falwells can be seen holding alcohol -- a simple act that could get a Liberty University student expelled. Co-ed dancing is also frowned upon at the school.

Falwell's indiscretions weren't limited to Miami. His coarse language on social media mirrored the popular culture but shocked those back at the school his father had established in 1971 -- eight years before he began the influential Moral Majority.

Eyebrows rose and tongues clucked at Liberty when Falwell told another Christian leader on Twitter to "grow a pair"  -- a suggestion he also made to "spineless Repubs" on April 18, 2019.

Falwell allegedly showed up on campus multiple times reeking of alcohol. At a Liberty football game, he accidentally sent a steamy picture of his wife to a number of school administrators, as well as to his own son. Then there was the picture he posted on Instagram of himself and a young woman on a yacht with their zippers down, which got him suspended. That scandal was followed by the bombshell report on Granda.

"Everyone at Liberty University treated the Falwells like a royal family," he said. "Faculty, the Board, legal team and friends within the trusted 'inner circle' all looked the other way out of fear."

Granda said he's been on vacation with the Falwells in the past, flown on Liberty's private jet and has pictures with the family at football and hockey games, touring the campus with guest speakers and at convocation.

"They treated me like a part of the family," he said, acknowledging the peculiar dynamics of their bond.

Two days before Granda's account of the relationship with the Falwells was made public, Falwell told a Washington newspaper that it was Granda who was trying to blackmail the couple, that his relationship with Becki had become obsessive, and that the situation had turned into a "fatal attraction." Falwell claimed Granda had threatened to expose the affair and that the threat triggered an emotional roller coaster for his family.

Granda wasn't surprised that Falwell tried to pin the affair on his wife's promiscuity.

"Jerry and Becki's version is false," Granda said. "[Jerry] was aware of our relationship from day one. Jerry is incapable of accepting responsibility for his actions. Therefore, I was not shocked by his attempt to shift the blame to someone else."

Giancarlo Granda, who was befriended by Liberty University President Jerry Falwell Jr and his wife Rebecca while he was working as a pool attendant at a luxury Miami Beach hotel. (Reuters)

Since Falwell's abrupt departure from Liberty University on Aug. 25, the school has gone through a reckoning as it struggles to come to terms with the fallout.

The school has hired a forensic auditor "to conduct a thorough investigation" that will examine the school's operations under Falwell, including financial and real estate deals made during that time. It is not believed the school will look into deals Falwell made between 2001 and 2005 when he was Liberty's lawyer.

Multiple calls to the Falwell family for comment were not returned.

Coming up on Thursday, Sept. 9: Fox News Digital investigates where the lines between personal profit and official school business may have blurred at Liberty University.