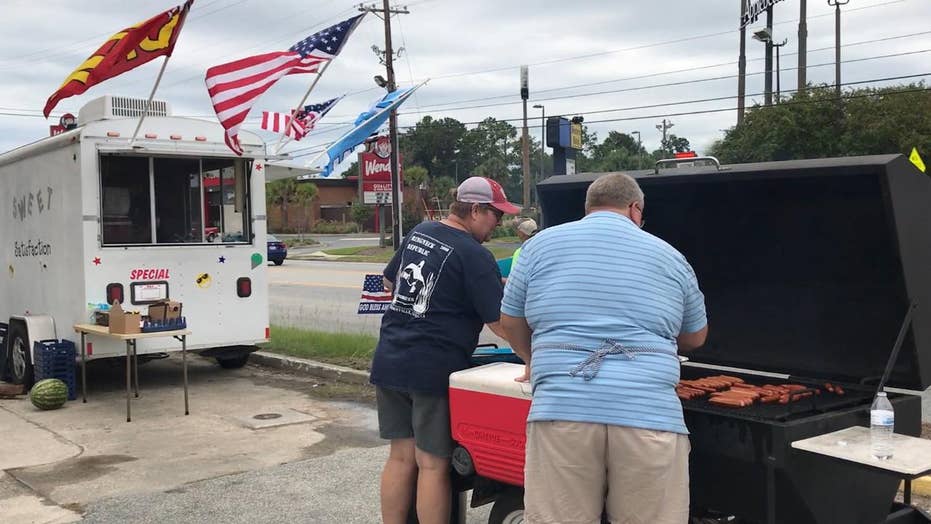 Volunteers gather to cook and feed evacuees in Valdosta, Georgia

Hurricane Irma appears to bringing out the best in some volunteers in southern Georgia. As many evacuees left Florida to escape the storm's damage, locals in Valdosta, Ga., were trying to make the whole experience more comfortable.

"We are having a lot of bottleneck traffic on [Interstate] 75 slowing down. People without food, people without money to buy gas. We just felt like it was our duty as Americans to come out and cook,” Chad Harrison told Fox News.

Harrison and a group of volunteers gathered outside a gas station near an I-75 exit in Valdosta cooking hot dogs and waving signs that said “Free food for evacuees.” Harrison said many evacuees were dealing with a very stressful situation and giving them food, or money to get gas, was a way to alleviate some of their anxiety.

“We have probably fed over 2,000 people on the interstate today,” Harrison said. “Fifteen to 20 families have been helped as far as gas, supplies that they needed, water, drinks, food, letting their dogs just get out.

"We have probably fed over 2,000 people on the interstate today."

Two Venezuelan natives evacuated from Miami and it was the signs about free food that drew their attention.

“We were just passing here, Valdosta, and we just see that you guys were giving food for the people who were evacuating from the … so we come and grab some sandwiches,” Anny Sanchez and Faith D’aubeterre said. “Thank you so much for giving the, I like, for helping us.

Valdosta, along with most of Georgia, is expected to feel the effects of Irma on Monday.