MINNEAPOLIS – When I arrived in Minneapolis days before the Derek Chauvin trial was set to begin, I wanted to know how the locals were dealing with the aftermath of the gruesome killing of George Floyd. Not many people have lived through the experience of having an entire world turn a judgmental eye on their community. Had the last 10 months since Floyd’s death made the locals jaded, bitter, or all the more wiser?

Several shop owners on Lake Street, the epicenter of the riots, were hospitable enough to me but the weariness in their eyes told me to take my camera elsewhere. Then I got the name of a man who would speak with me: Wayne Buggs, the associate executive director of the St. Vincent De Paul Thrift Shop. He has worked there since 1997.

I walked past the colorful murals decorating the facade of the thrift shop and found myself inside, among Somali immigrants and green-haired hipsters. The shop was full of clothes and wares, and it was hard to imagine that it had been looted and destroyed on consecutive nights. I wanted to ask Wayne why anyone would want to destroy a shop that truly served the community.

Wayne emerged from the back office and, as we shook hands, I told him that I found out that he was from Harvey, Illinois, the same South Side Chicago township that had played such a role in my father’s upbringing. My father, who is over 20 years older than Wayne, had grown up in the neighboring township of Phoenix, and Harvey was a White town during the era of segregation. I told Wayne that my father had once said that walking through the main street of Harvey as a kid was like walking through Paris.

HOW TO WATCH THE DEREK CHAUVIN TRIAL

I quickly realized by Wayne’s muted smile that the Harvey he grew up in was a vastly different world than my father’s. When the forces of integration swept through America in the late 1960s, White people fled Harvey and so Wayne was born into a rough and impoverished world. One could even say that Wayne came from a world far more reminiscent of the world that George Floyd grew up and lived in.

A business labeled "Black Owned" remains untouched by looters, Friday, May 29, 2020, in Minneapolis. Protests continued following the death of George Floyd, who died after being restrained by Minneapolis police officers on Memorial Day. (AP Photo/John Minchillo)

As I set up the camera for the interview, I asked Wayne why people would destroy his thrift shop and he spoke of the need to witness the pain of Blacks as a way to move forward positively. I’ve had friends who often spoke of the need to witness "Black pain," and they did so to milk power from guilty Whites. But, the more I listened to Wayne, the more I began to understand that he was referring to the biblical form of witnessing. When Jesus walked among the thieves and prostitutes, he did so to bear witness to their lives and ways of being.

Then, I remembered that my father has often spoken of this same need as well. My father and Wayne came from the same area, lived vastly different upbringings, and yet they somehow had the same understanding of what could help America move forward. 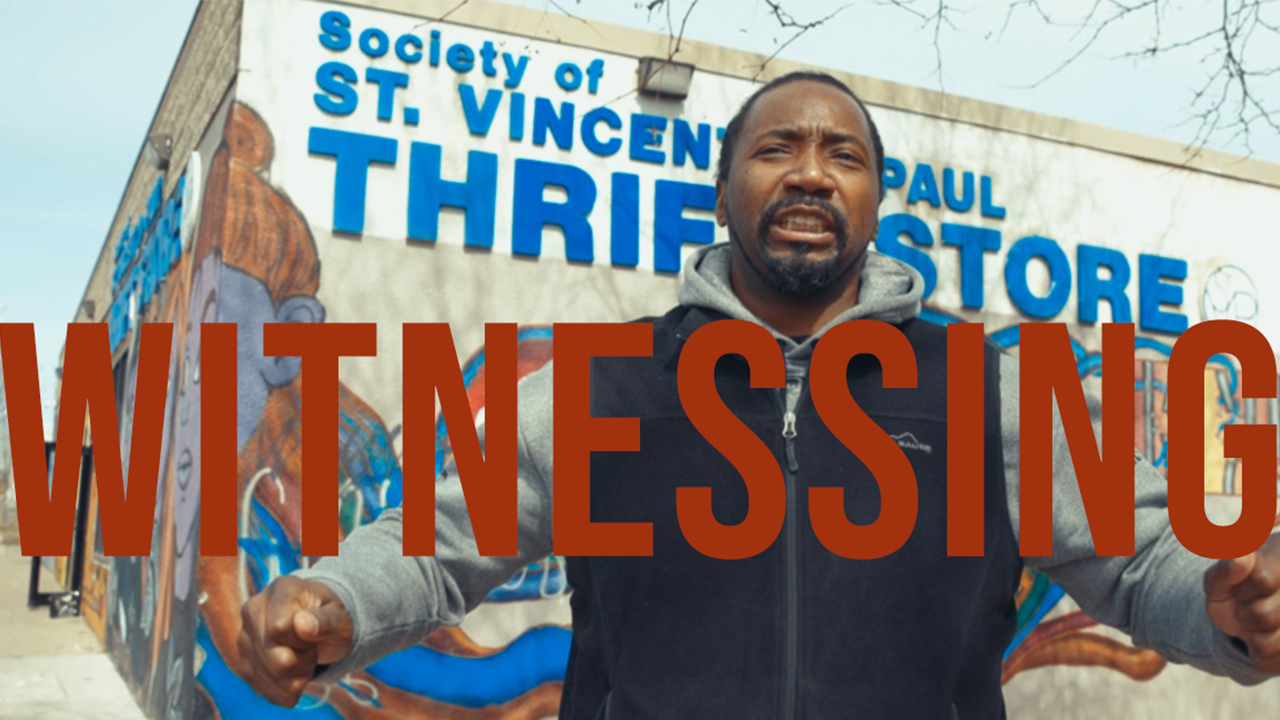 Both men knew deep down that Blacks have been invisible for too long. When Chauvin kneeled on Floyd, he was blind to Floyd’s pains and deaf to his cries. When George Floyd departed this earth, he became a political cudgel and cultural symbol to be used by the powers-that-be for whatever causes they served.

Sadly, this is nothing new in America. After all, the greatest America novel ever written is Ralph Ellison’s "Invisible Man." As the nameless narrator makes his way through society, various political and cultural forces attempt to exploit him for their own agendas and he ends up retreating underground to find his true sense of individuality. Nobody opened their hearts and became a true witness to the Invisible Man, and that is why we never learned his name.

Sandra King, 70, waits for her granddaughter near the remains of AutoZone across from the Minneapolis 3rd Police Precinct in in Minneapolis on Thursday, May 28, 2020. King, who lives in the neighborhood was brought to a protest by her granddaughter. (Carlos Gonzalez/Star Tribune via AP)

GEORGE FLOYD: THE NUMBERS BEHIND THE DEREK CHAUVIN TRIAL AND THE NATIONWIDE PROTEST

As my conversation with Wayne progressed during the interview, his definition of what it means to be a witness began to expand as he talked about the act of witnessing as a way for all humans to heal. He had moved from Black pain to human pain and, in doing so, showed me the certain kind of grace that is required to rise above what divides us. And, most of us never aspire to this kind of grace because it is the very things that divide us that give us tremendous power in our society.

I found myself becoming quieter as I listened to Wayne’s story. In the beginning, my mind filled with questions, thoughts, agreements and arguments, but the more I listened to Wayne, all of that began to fade away. His rich and complex humanity began to unfold before me. I learned that he went from selling drugs in an alley to serving his community in a thrift shop. I learned that he went back to school for his GED and ended up with a master’s degree, yet he values, above all, the degree that he earned from life experiences, for they help him bond with humans from all walks of life.

To be a witness does not mean the surrendering of one’s values and principles; it only means understanding and empathy. The act of witnessing allows one to absorb the experiences of another human, allowing one to grow wiser. Even the negative man has many lessons to teach us.

What also struck me about listening to Wayne was that his words were void of ideology. He never claimed to have all the solutions, but he knows they must be pragmatic and serve the people, not the powers. It then dawned on me that the act of witnessing serves as a powerful counterforce to the ideologies sweeping across the nation. Ideology blinds us to humanity while the act of witnessing reveals.

We see this blindness more than ever in today’s identity-politics-choked America. We cannot guess what went through Chauvin’s mind as he kneeled on Floyd, but his hands in his pockets and his defiant stare revealed a man blinded to the man beneath his knee. When Al Sharpton declares "America is on trial" in front of the Minneapolis courthouse, he blinds himself to the progress that countless Blacks have made in America, including himself, Wayne, and my father. Similarly, when our government introduces critical race theory into classrooms, reducing children to their skin tones, they blind our children to our greater humanity. And when we demonize one another politically, we do so to avoid having to deal with one another.

George Floyd Square is shown on Feb. 8, 2021, in Minneapolis. Ten months after police officers brushed off George Floyd's moans for help on the street outside a south Minneapolis grocery, the square remains a makeshift memorial for Floyd who died at the hand of police making an arrest. The trial of former Minneapolis police officer Derek Chauvin will begin with jury selection on March 8. (AP Photo/Jim Mone)

When I left my interview with Wayne, I felt a sense of lightness and freedom, almost as if I had been cleansed. I felt empowered by my connection to Wayne, his story, and, by extension, our greater humanity. I did not agree with everything that Wayne said and I know he would not agree with everything I said — who would want to live in such a conformist world? But the beauty of bearing witness to another person’s experience is that it is perhaps the most individualistic act there is. And it is this lesson from Wayne that I will be carrying with me as we strive to create a better America out of the tragic death of George Floyd.

Eli Steele is a documentary filmmaker and writer. His latest film is "What Killed Michael Brown?"
Twitter: @Hebro_Steele