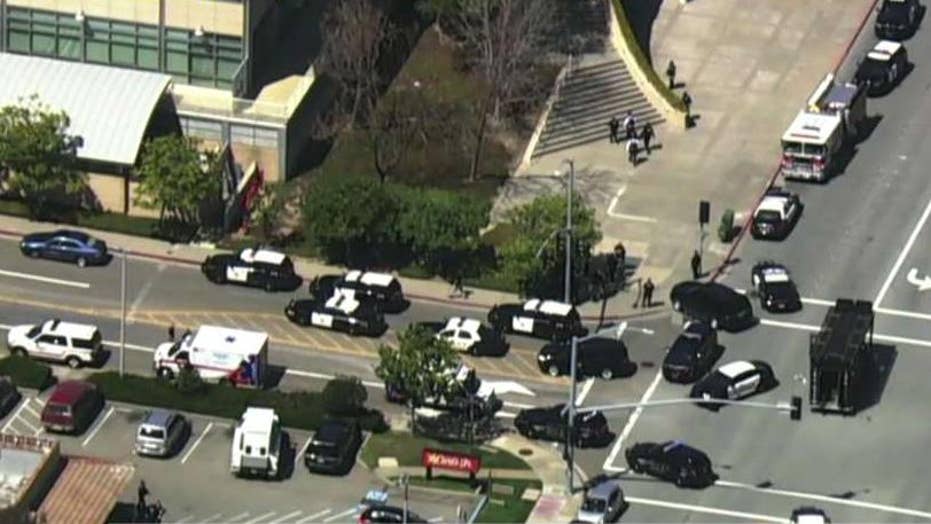 Reports of shooting at YouTube headquarters in San Bruno

Massive police response in California; YouTube campus on lockdown as authorities work to evacuate the building.

A woman opened fire at YouTube headquarters in San Bruno, Calif., on Tuesday, in a shooting that left four people injured before she turned the gun on herself, police said. Authorities are investigating the incident as a domestic dispute, two law enforcement sources told the Associated Press.

The victims included a 36-year-old man in critical condition, a 32-year-old woman in serious condition and a 27-year-old woman in fair condition at San Francisco General Hospital, officials said. Police said three of the four "victims" -- not including the shooter -- were shot, and a fourth person suffered an ankle injury.

Witnesses told KTVU-TV that the suspect shot her boyfriend before killing herself, but police would not confirm identities or a possible motive. Investigators said the incident did not appear to be terrorism, the Los Angeles Times reported.

Authorities on scene at the Youtube Headquarters in San Bruno, California. (KTVU)

In response to the shooting, YouTube CEO Susan Wojcicki tweeted, "There are no words to describe how horrible it was to have an active shooter @YouTube today."

"Our deepest gratitude to law enforcement & first responders for their rapid response," she continued. "Our hearts go out to all those injured & impacted today. We will come together to heal as a family."

The gunfire lasted approximately 30 seconds, witnesses told the San Francisco Chronicle. The suspect's face was reportedly covered, leading some witnesses to think she was male.

The California Highway Patrol told Fox News that San Bruno police requested their assistance with the perimeter regarding reports of an active shooter. (KTVU)

Zach Vorhies, a senior software engineer at the company, told the Associated Press that the fire alarm went off but employees didn't realize it was an active shooting situation. As they calmly exited the building, he said he saw a shooter in the courtyard shouting, "Come at me, or come get me." Vorhies said he froze and saw a victim on his back with what appeared to be a gunshot wound to his stomach. An officer armed with an assault rifle then entered through a security door, he said.

San Bruno police confirmed on Twitter that they were responding to an active shooter. They previously tweeted there was police activity at 901 Cherry Ave., where the company's campus is located. They advised the public to "stay out of the area."

President Donald Trump tweeted that he was briefed on the matter and added "our thoughts and prayers are with everybody involved." He also thanked law enforcement and responders who are on the scene. White House press secretary Sarah Sanders previously told Fox News that the president was briefed and they were monitoring the situation.

San Bruno City Manager Connie Jackson told KTVU the situation was "relatively secure" about an hour after the gunshots were first reported.

Users on social media indicated that ambulances were arriving and nearby offices were on lockdown. Many claimed there was an "active shooter."

Aerial images from KTVU showed officers on the scene, with some patting down a line of people outside.

Aerial images showed officers on scene, with some patting down a line of people outside. (KTVU)

Todd Sherman, who identified himself as a product manager at YouTube, claimed on Twitter that he was in a meeting at the building when they heard people running. He said he and others made their way to the exit and at one point when he "looked down" he "saw blood drips on the floor and stairs." He said he saw authorities on the scene before departing the scene.

The California Highway Patrol told Fox News that San Bruno police requested their assistance with the perimeter regarding reports of an active shooter.

Regarding the situation, Google Communications tweeted that the company was "coordinating with authorities and will provide official information here from Google and YouTube as it becomes available."

The FBI San Francisco office tweeted that agents were at the scene "in support of our local law enforcement partners." The San Bruno police were the lead agency, they added. The bureau of Alcohol, Tobacco, Firearms and Explosives (ATF) tweeted that its San Francisco field office was also responding to the scene.