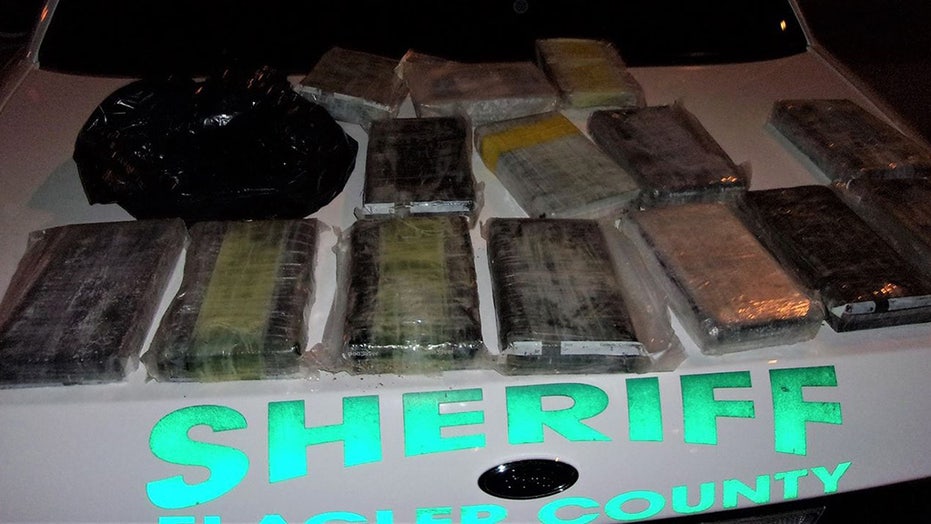 This was a pricey catch that ended up washing up along a Florida beach.

The Flagler County Sheriff’s Office said in a news release that a duffel bag containing 15 kilos of cocaine was discovered Friday night after it washed ashore in the Hammock area of Palm Coast.

“It is likely that these drugs have been in the ocean for a long time and they just happened to wash up on our beach from the rough surf and wind we have had the last few days,” Sheriff Rick Staly said in a statement.

The sheriff's office said they received an anonymous call around 7 p.m. regarding the duffel bag, which was covered in barnacles and seaweed and contained 15 individually wrapped packages. The bag discovered by police also had a large amount of sand and shells, which led deputies to believe it had been in the ocean for some time.

A duffel bag containing 15 kilos of cocaine was discovered Friday night after it washed ashore in Palm Coast, Fla., according to police. (Flagler County Sheriff’s Office)

One of the kilo-sized bricks inside had opened up, and a block of white substance was exposed.

The sheriff's office the white substance tested positive for cocaine upon testing.

"I’m thankful that the person who located the bag did the right thing and called us," Staly said in the news release. "These are dangerous narcotics and could be deadly in the wrong hands.”

Officials said the beach was searched, but no additional bags were found. Neighboring law enforcement agencies were notified of the narcotics so that they could check their beaches.

The drugs discovered on the beach Friday were entered into evidence and will eventually be destroyed. Neat told FOX35 that the cocaine in the bag could be worth between "$500,000 to $600,000."

Neat said this is not the first time this has happened in Flagler County.

"Typically when we get some sort of rough weather or northeasterly winds like were having now, the ocean picks up and anything that's lost at sea sometimes gets washed up due to the weather," he told FOX35.

The sheriff's office is asking anyone who comes across a suspicious package to contact law enforcement immediately 1-888-277-TIPS (8477). Those who contact police may be eligible for a reward up to $5,000, according to the sheriff's office.