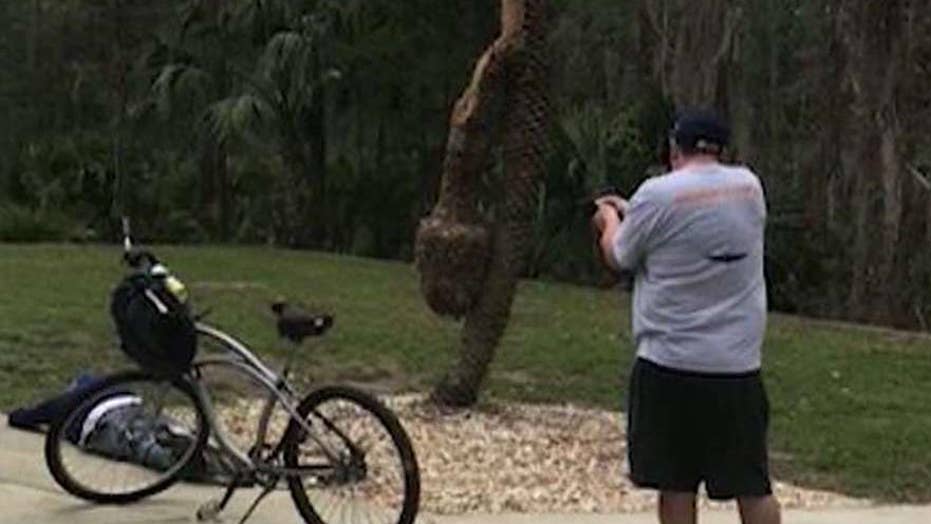 A man caught a thief attempting to break into his garage and held him at gunpoint until the police arrived.

A would-be burglar in Florida had his plans foiled Saturday after he encountered an armed homeowner, according to officials.

The Volusia County Sheriff's Office said the incident took place in New Smyrna Beach around 11:15 a.m. when a woman called 911 to report a stranger on her property.

When the woman's husband walked outside to check the situation out, he told deputies he found the man standing at the door to his garage with his hand on the doorknob.

"He's on the ground at gun point, ma'am. He's cursing at me," the man told a 911 dispatcher in audio obtained by FOX35. "I'm out here with my wife. Please get them here."

The man held the suspected burglar at gunpoint while on the phone with 911 until police arrived. (FOX35)

The man told the suspect, identified as 39-year-old Patrick Edwards, to get on the ground and he complied.

FBI SEARCHING FOR TRAILER HOLDING $65G WORTH OF ENERGY DRINKS

Man who was alerted by neighbors about suspicious activity holds three men at gunpoint after they allegedly broke into his parents' home.

Once deputies got to the home located south of Daytona Beach they allegedly found a syringe, tools and gloves on Edwards.

The 39-year-old told police he was lost and looking for a neighbor, according to an incident report obtained by the television station.

Edwards was charged with attempted burglary and possession of burglary tools, according to police.