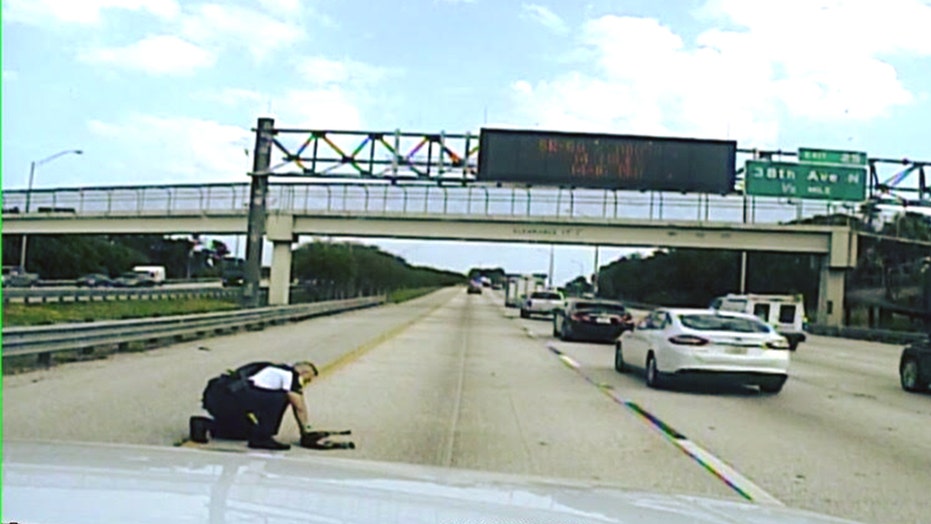 A Florida police officer has been hailed as a hero after he stopped traffic on a busy highway to rescue a dog who had just been hit by a car.

Officer Joseph Puglia of the Pinellas Park Police Department was driving to work Sept. 19 when he saw a dog get hit by a car on Interstate 275.

Immediately, Puglia "swerved over to block the dog from traffic" in a moment that was caught on his dashcam video.

The officer noticed the dog was "showing signs of life" and transported it to a nearby animal hospital.

"My heart really sank until I started seeing him breathing," Puglia told WFTS. "I came back [in the SUV] and got an emergency blanket to wrap the dog in, because I didn't want to hurt him any further."

Officer Joseph Puglia stopped to rescue "Lucky" this week after he noticed the dog was hit by a car. (Pinellas Park Police Department)

"After some medical examinations, the dog is expected to make a full recovery. The owner has not yet been located due to the dog not having a microchip or tag," police wrote in a Facebook post. The pup suffered minor cuts and bruises.

Puglia said they nicknamed the dog "Lucky," which he says applies because "he's definitely one lucky dog."

It's unclear who the dog's owner is, as it wasn't microchipped and wasn't wearing any tags. Anyone with information on who the owner may be is urged to contact Pinellas County Animal Services at 727-582-2600.