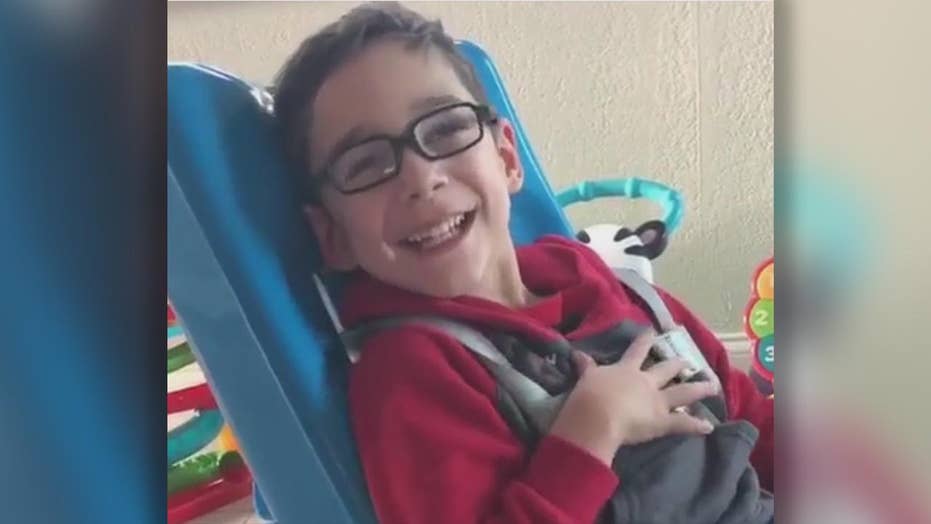 Jake Garza, a 5-year-old boy with an “infectious personality,” was once a relatively quiet child. But that all changed after he learned how to recite the Pledge of Allegiance.

Last month, Jake was spending time with family in his hometown of St. Petersburg, Florida, when "all of a sudden, he started reciting the pledge,” Jake’s father, Eric, told Fox News on Wednesday.

“It hit me right in the heart,” said Eric, who’s an active duty member of the U.S. Coast Guard. The moment brought the 32-year-old father to tears.

Eric said he had no idea his son Jake could recite the pledge. (Eric Garza)

This was a particular accomplishment for Jake, who was born prematurely and has faced many health obstacles throughout his lifetime, including cerebral palsy -- a neurological disorder that “primarily affects body movement and muscle coordination,” according to the Cerebral Palsy Foundation.

Eric said he had “no idea” his son was able to recite the pledge, especially because “he was showing some [speech] progress but could only say words like ‘yes’ and ‘no.’"

Jake first learned the pledge at Sexton Elementary School, where he attends Pre-K, Eric said, adding that he is grateful to both the teachers and Jake’s personal aide at the school who help his son daily.

Jake can now recite the pledge "on cue," his father said. (Eric Garza)

The moment was special for Taylor Garza -- Eric’s wife and Jake’s stepmother -- as well.

"It is all just extremely emotional for me -- it just caught us both so off guard," Taylor told Fox News.

She said the family was playing music and singing songs when Jake started "saying something that sounded all too familiar. I looked at my husband and said, 'Hurry, get your camera and record this.'"

"To see your kid hit such a big milestone and get out the whole pledge was amazing and brought tears of joy," she added.

“He’s been through a lot since he was born. His mother passed away from cancer,” Eric said, adding that Taylor has been “so supportive in helping me raise him.”

Jake, whose nickname is “Mr. Handsome,” now recites the pledge on cue. It has also helped the 5-year-old with other areas of speech, his father said, who added that his son is now “speaking full sentences.”