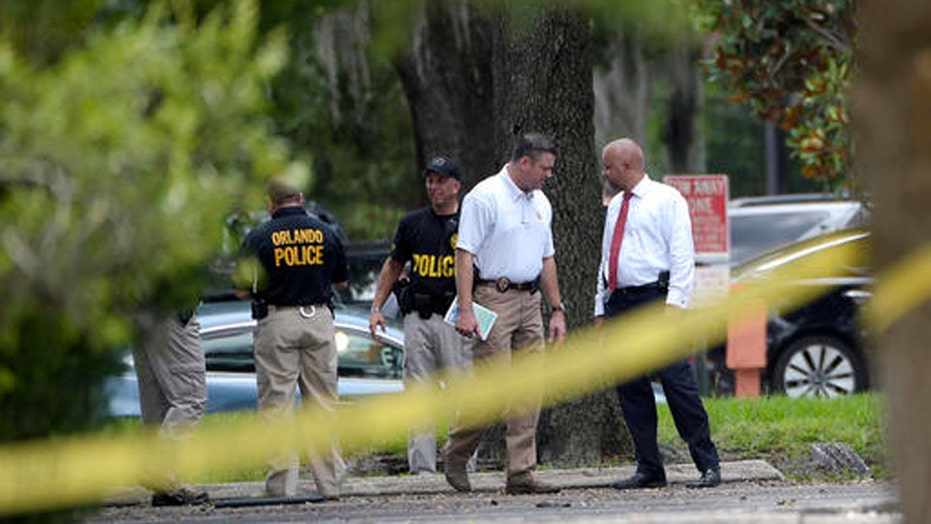 Peter Doocy with the story for 'Special Report'

Investigators from the FBI are searching the electronic devices of the Muslim terrorist who killed at least 49 people in an Orlando nightclub for any direct indications that he planned to target Disney World or nearby Downtown Disney, a law enforcement source close to the investigation told Fox News on Monday.

The search for evidence of any plan to target Disney is in addition to scrubbing those devices for communications with any FBI-flagged individuals, domestic or international, the source said.

As of Monday, investigators are currently scrubbing the Pulse nightclub gunman’s computer for any pictures or videos of Disney World that would suggest Omar Mateen cased the park or its surrounding areas as a potential target, according to the source.

When asked if any direct evidence was found so far, the source told Fox News "it's still early."

The FBI has also been in contact with security officials at Disney World to review security camera footage that would place Mateen at the park or at any of its surrounding attractions, the law enforcement source said.

When also asked if investigators were able to access the gunman’s phone, source could not say, but did tell Fox News that once on his phone, investigators would direct attention to the device’s geolocation history to determine any extended periods of time spent in the area of Disney World.

At a press briefing Monday afternoon, FBI Director James Comey told reporters that investigators were “still working through” whether Mateen scouted the theme park as a potential terror target.

Salman told authorities the couple had recently been to Downtown Disney as well as Pulse in April, a federal law enforcement source told People. People's source indicated Mateen may have been scouting the locations for a potential attack.

“Unfortunately we’ve all been living in a world of uncertainty, and we have been increasing our security measures across our properties for some time, adding such visible safeguards as magnetometers, additional canine units, and law enforcement officers on site, as well as less visible systems that employ state-of-the-art security technologies," a Disney spokesperson said in a statement to Fox News.

People who knew Mateen and law enforcement authorities piecing together his decent into radical Islam described him as an angry loner who beat his ex-wife, alienated co-workers and made at least two mysterious trips to Saudi Arabia.

On Monday, FBI Director Comey said that three phone calls between Omar Mateen and a 911 operator while Mateen was holed up in a club bathroom with hostages may provide insight into his radicalization. During those calls, Comey said, Mateen "made clear his support for" ISIS and pledged loyalty to the terror group's leader.

However, Mateen also "claimed solidarity" with the Boston Marathon bombers -- who learned how to make their pressure cooker bomb from an Al Qaeda-affiliated magazine -- and a man who blew himself up in Syria during an operation for Al-Nusra Front, leading Comey to say it was "unclear which terror group he aspired to support."

Another potential avenue of investigation is a pair of trips Mateen, 29, took to Saudi Arabia in March 2011 and March 2012 for umrah, a non-mandatory visit to Mecca for Muslims. Saudi Arabia's Interior Ministry spokesman confirmed the trips to The Associated Press in a text message Monday. Umrah can be performed at any time of the year.

Law enforcement officials could not confirm to Fox News what Mateen’s exact itinerary was, including cities he may have visited or individuals he may have met with; however, Mateen is known to have stayed in the Kingdom for 10 days during the first trip and eight days during the second trip.

After checking with Saudi officials, Comey said the FBI found nothing incriminating about the trips.

“We obviously don't know the details yet, but it's worth recalling how the San Bernardino shooters met in Saudi Arabia and were engaged there,” Ryan Mauro, a national security analyst for the Clarion Project, told FoxNews.com, referencing the ISIS-inspired December terror attack that killed 14 people in California. “These trips to Saudi Arabia also make it less likely that Mateen is a so-called ‘lone wolf’ who acted mostly independently.”

The Middle East jaunts came before Mateen was caught up in two FBI terror investigations. He was interviewed by the bureau twice in relation to a 2013 incident and once in 2014, but, officials said Sunday, Mateen was not assessed to be a threat. At the time of the shooting, Mateen was not under surveillance or the subject of an investigation, authorities said.

Mateen first appeared on the FBI's radar in May 2013 after co-workers at a courthouse where he served as a contract security guard reported that Mateen made claims he had family in Al Qaeda, a Sunni terror group, and was himself a member of Hezbollah, a Shia terror group. Mateen said he hoped law enforcement officials would raid his apartment and "assault his wife and child so he could martyr himself," Comey said. He's also alleged to have claimed a connection to the Boston Marathon bombers, The Washington Post reported.

The 2013 probe was closed after a 10-month investigation, during which agents introduced confidential sources to Mateen, recorded conversations with him, searched government archives and twice interviewed Mateen in person. He was on a watch list during the investigation, and if he had tried to purchase a firearm during this period, he would have been flagged to the FBI, Comey said.

Mateen told agents he had made the terror statements in anger "because co-workers were discriminating against him and teasing him because he was Muslim." Investigators came to believe the statements were mere boasts and Mateen was not legitimately tied to any terror groups.

“He seems to be looking for any opportunity to associate with the terrorist group du jour,” a senior U.S. official told The Washington Post.

FBI agents were back at Mateen’s door just a few months later in July 2014, this time because of possible ties to American-born suicide bomber Moner Abu-Salha, who blew himself up in Syria in 2014 on behalf of Al-Nusra Front. During its investigation, the FBI learned that Mateen, who attended the same Fort Pierce mosque as Salha, had watched online videos of an Islamist terror leader. However, FBI agents determined Mateen's contact with Salha was “minimal." Mateen was not the subject of the investigation and agents did not have further contact with him.

"We're also going to look at our work to see if there was something we should have done differently," Comey said. "So far the honest answer is, 'I don't think so.'"

President Obama said Monday the FBI followed proper procedure when they interviewed Mateen. The White House announced late Monday he will travel to Orlando on Thursday to pay respects to the victims of the massacre and their families.

Comey said the FBI was "highly confident" Mateen was radicalized at least in some part through the Internet.

Aside from the terror claims reported by co-workers, some who worked with Mateen were also disturbed by his language when talking about minorities, other religions and gay people.

“He talked about killing people all the time,” Daniel Gilroy told The New York Times.

Mateen was even less stable at home.

His first wife, who was born in Uzbekistan and met Mateen on the Internet, told The Washington Post that he frequently beat her after their 2009 marriage. They reportedly divorced in 2011.

“He would just come home and start beating me up because the laundry wasn’t finished or something like that,” Sitora Yusifiy said.

Mateen was remarried at least once, to Noor Zahi Salman, after his divorce from Yusifiy. He had a 3-year-old son.

Mateen's father, Saddique Mateen, recalled a recent episode in which Omar Mateen became upset when he saw two men kissing in public while he was with his young child. But Saddique may have also contributed to Omar’s worldview. Born in Afghanistan, Saddique is an eccentric pro-Taliban activist who produced an online video critical of homosexuality just hours after Mateen’s attack.

“It is likely, much like the San Bernardino event, that Mateen became radicalized over a period of time as he dove further into the world of ISIS social media and preaching,” former CIA agent Mike Baker said. “It's very likely his Afghan family saw signs of increasing radicalism, but, as is typical, family rarely approaches law enforcement with these warnings.”