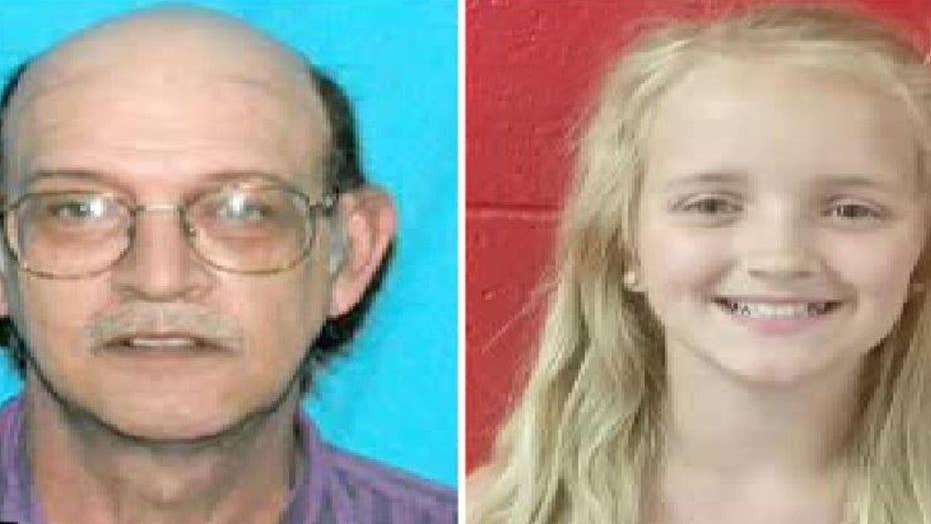 Multi-state Amber Alert for a 9-year-old Tennessee girl,Carlie Marie Trent, who authorities say has been abducted by her noncustodial uncle, Gary Simpson. 'On the Record' has the latest

The father of a missing 9-year-old Tennessee girl said Tuesday that her alleged abductor was obsessed with her and wanted her all to himself.

James Trent, the father of Carlie Marie Trent, told WVLT-TV that Gary Simpson, 57, was jealous over the girl. James Trent told the station that Simpson knew Carlie all her life and had married Trent's sister. James Trent also said that Simpson and his wife often took care of his daughter.

"He had access to her every day, he was obsessed with her, he wanted her, and he wanted her all to himself," Trent said. "That's a scary thing to think about."

James Trent said that he doesn’t think Simpson will hurt Carlie, but is worried what will happen if she returns home.

“It would be a great moment, but then again it'll be a scary moment because I'm just wondering how she's going to be. Is she going to be as happy as she was? [Is] she going to be scared to death of everyone?" he explained. "That's what I worry about. She just won't be the same."

The Tennessee Bureau of Investigation (TBI) said Wednesday that the case is not a simple custody dispute and stressed that Carlie could be in grave danger.

“We realize Gary Simpson is Carlie Trent’s uncle by marriage, but we have specific – we have credible – information that Carlie Trent is in imminent danger of serious bodily harm or death,” TBI spokesperson Josh DeVine said during an afternoon press conference. “When we say this child is in danger we absolutely mean it.”

DeVine said the custody battle narrative had developed in the week since Trent was picked up from her school by Simpson, her former guardian. Simpson had recently lost custody of Trent, who was in her father’s care before her disappearance. But DeVine was emphatic that Trent’s kidnapping was not merely the product of a guardianship battle.

An Amber Alert remained in effect Wednesday, but authorities had yet to receive a tip of any concrete sightings of Trent or Simpson. Officials believe the two may be in a campground or secluded area.

Police said they believe Simpson is driving a 2002 white Dodge conversion van with a Tennessee license plate 173GPS. The van is described as having a dark stripe down the middle with a light gold running board on either side.

Here are items Gary Simpson purchased, before taking Carlie from her school May 4th. #BringCarlieHome pic.twitter.com/fGuVw7LSsZ

Investigators also said the two stopped at a Save-A-Lot grocery store on the same day to pick up “nonperishable items.”

Anyone with information about Trent and Simpson’s whereabouts is urged to call the Rogersville Police Department at 423-272-7555 or TBI at 1-800-TBI-FIND.