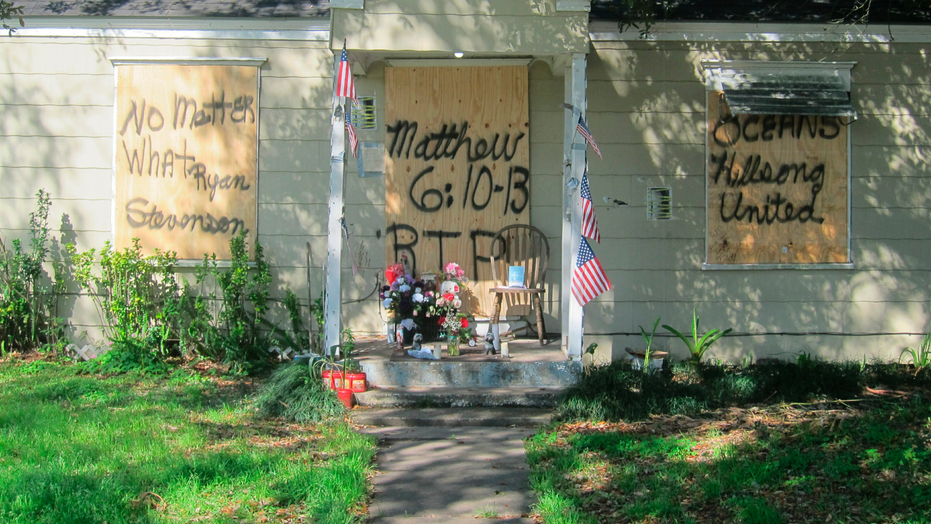 A former Houston police officer has been charged with two counts of felony murder in connection to a botched narcotics raid earlier this year that left two people and their dog dead and four officers wounded, authorities announced Friday.

"The eyes of this community and the nation are on this case; it is critical to the public trust that we reveal the true facts about what, how and why two civilians were killed in their own home by members of the Houston Police Narcotics Squad 15,” Harris County District Attorney Kim Ogg said. "These two charges of Felony Murder and Tampering with a Government Document against former Officers Goines and Bryant are the beginning of holding those responsible accountable.

CHIEF: OFFICER LIED IN AN AFFIDAVIT BEFORE DEADLY HOUSTON RAID

"This is the start, the tip of the iceberg, in terms of how deep and wide we are investigating," Ogg added. "We will find the truth about this entire matter."

A makeshift memorial was set up in front of Tuttle and Nicholas' home following the raid. (AP Photo/Juan Lozano)

Both former officers surrendered to authorities Friday afternoon and appeared at a bond hearing. Details about the bond hearing were not immediately known. Goines faces up to life in prison if convicted, while Bryant faces up to two years in state jail.

The Jan. 28 raid resulted in a firefight that killed residents Dennis Tuttle, 59, and Rhogena Nicholas, 58. Goines was one of the four officers wounded. Tuttle and Nicholas were alleged to have sold heroin, a claim their family and friends have denied. Police found small amounts of marijuana and cocaine in the house, but no heroin.

PROBE OF CASES FROM HOUSTON OFFICERS IN DEADLY RAID EXPANDED

In a subsequent investigation, police accused Goines of lying in a search warrant about having a confidential informant buying heroin at the home. Goines later acknowledged there was no informant and that he bought the drugs himself. Both Goines and Bryant were relieved of duty after the shooting and later retired.

An independent review of the incident by Nicholas’ family cast doubt on initial claims by police that Nicholas was shot and killed by officers who saw her trying to take away a fellow officer's gun.

Legal counsel for Nicholas' family -- Michael Patrick Doyle of Doyle LLP, in Houston, and Charles C. Bourque of St. Martin & Bourque LLC, in Houma, La. -- issued a statement to Fox News on Friday, saying, "The indictments today of former HPD Gerald Goines and Steven Bryant are important developments, but they should be only the beginning of the pursuit of justice in the police killings of Rhogena Nicholas and Dennis Tuttle."

"The Nicholas family’s search for the truth of what happened to Rhogena also continues. Our independent investigation is focused not only on HPD Narcotics Squad 15, but also about the conduct, pattern and practices of HPD before, during and after the out-of-control, unjustified execution of Rhogena in her own home," counsel noted.

"Finally, the Nicholas family is grateful for the work of the Harris County District Attorney’s Office, as well as all city, state and federal law enforcement personnel committed to a complete investigation of this terrible incident. They remain hopeful that the justice system will succeed in helping prevent other families from ordeals like theirs," counsel added.

Police respond to the scene of the raid on Jan. 28 of this year. (Brett Coomer/Houston Chronicle via AP File)

The Houston Police Officers’ Union later issued a statement and said, “Due to the pending criminal charges, it would be inappropriate for the HPOU to provide any additional comments. … The HPOU is pleased the District Attorney's office appears to concur with the conclusions reached by the Houston Police Department investigation that no other officers [were] involved in any criminal activity relating to the execution of the warrant or the shooting.”

Following the shooting, prosecutors began reviewing more than 2,000 cases tied to Goines and Bryant. In June, prosecutors said their investigation has grown into a probe of 14,000 cases handled by the Houston Police Department's narcotics division.

Ogg said prosecutors decided to file charges instead of waiting to present the case to a grand jury because they feared the two officers might flee the area and they feared for the safety of witnesses.

The case is still set to be presented to a grand jury in the next few weeks and the panel could file additional charges against the two officers or charges against other officers, Ogg said.