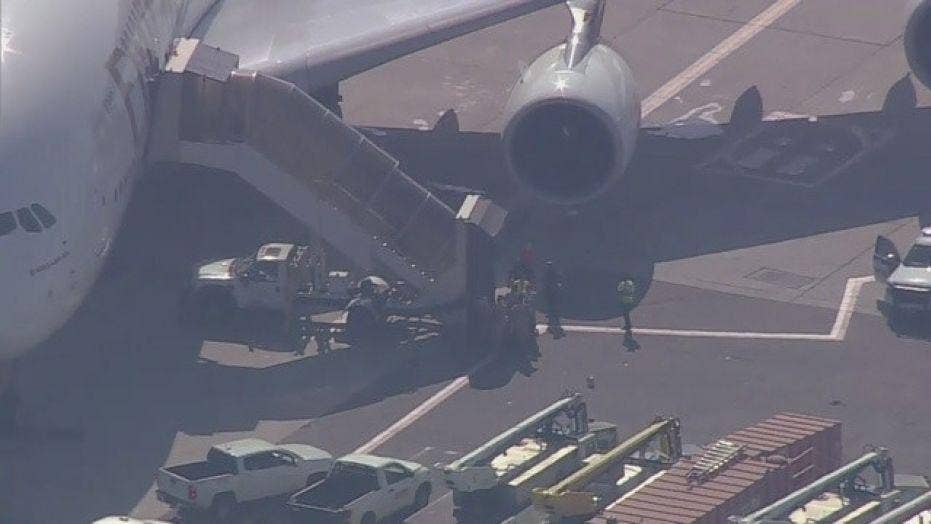 Officials say at least 10 people were taken to the hospital after an Emirates Airline plane from Dubai landed in New York City with about 100 passengers and crewmembers who reported feeling ill, some with a cough and a fever.

Ten people were taken to the hospital Wednesday after an Emirates Airline plane from Dubai — carrying more than 500 passengers and apparently rapper Vanilla Ice — landed in New York City with about 100 passengers and crew members feeling ill, officials said.

Influenza is believed to be the culprit, as patients have demonstrated flu-like symptoms, a New York City health official said.

"Given the symptoms that we are seeing in the patients and given the history that they present, it looks like this is probably influenza," Acting New York City Health Commissioner Dr. Oxiris Barbot said. "But again, until we have our final results late tonight we won't be able to give a final determination on what the underlying cause is of this illness."

Officials from the Centers for Disease Control and Prevention (CDC) and local authorities arrived at John F. Kennedy airport around 9 a.m. shortly before Emirates Flight 203 landed with 520 people on board. The plane was quarantined as authorities evaluated the situation.

Vanilla Ice appeared to be one of the passengers on the plane. He tweeted around 1:40 p.m. that he was seated on the top floor of the Emirates flight and landed at the New York City airport with “tons of ambulances and fire trucks and police all over the place.”

“This is crazy. Apparently there is over 100 people sick on the bottom floor, so happy I’m up top, it’s a double-decker plane 380,” the “Ice Ice Baby” rapper tweeted hours after the morning incident.

The CDC said 100 passengers and some crew members on the flight complained of feeling sick. Some reported symptoms of a cough and fever.

“CDC public health officers are working with port authority, EMS, and CBP officials to evaluate passengers including taking temperatures and making arrangements for transport to local hospitals those that need care,” the CDC said in an initial statement. “Passengers who are not ill will be allowed to continue with their travel plans, and if necessary will be followed up with by health officials.”

Emergency response crews gather outside a plane at New York's Kennedy Airport amid reports of ill passengers aboard a flight from Dubai on Wednesday. (AP)

By 12:30 p.m., all passengers and crew members were off the aircraft after undergoing evaluation.

“All passengers were screened by the local health authorities prior to disembarkation, and three passengers and seven crew members were transferred to the hospital for further medical care and evaluation. Nine passengers underwent additional medical screening at the site near the aircraft and were released afterwards. The rest of the passengers were allowed to leave and clear customs,” the airline told reporters.

“We apologize to our customers for any inconvenience caused. The safety and well-being of our customers and crew is always our top priority.”

Phillips said health officials were conducting tests to determine what caused the sickness.

The spokesman also initially tweeted that the flight from Dubai stopped in Mecca, where there's a flu outbreak. He later clarified that some of the passengers came from Mecca and the flight was a direct one from Dubai to New York City.