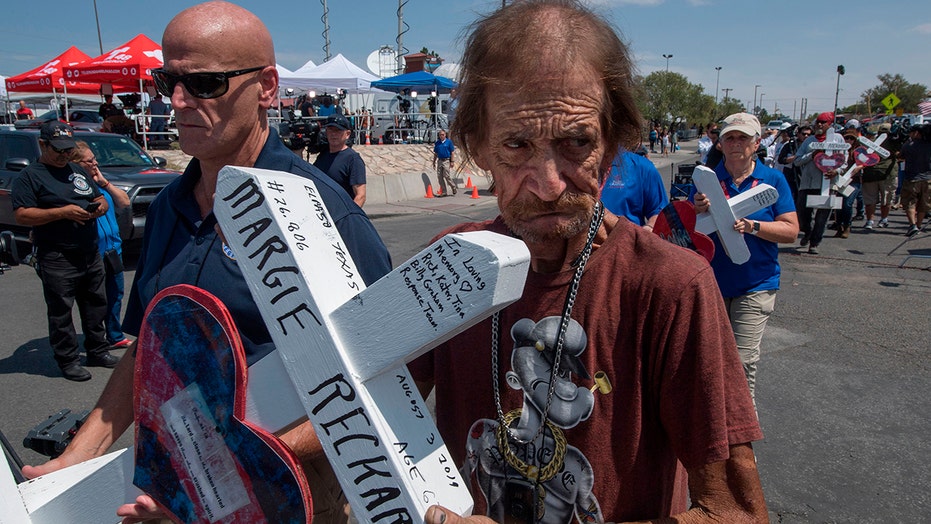 The aftermath of mass shootings in Ohio and Texas

Find out how you can help Texas and Ohio shooting victims.

A Texas man whose only family — his wife of 22 years — died in the El Paso massacre is asking the public to attend her funeral services this Friday.

Antonio Basco was married to Margie Reckard, 63, for more than two decades. Reckard was killed on Aug. 3 when a gunman opened fire at a Walmart store, killing 22 people and injuring another 24.

After her death, Basco described Reckard as "an angel," and said the two planned to live together until their final breaths.

Antonio Basbo invited the public to attend the funeral services of his wife Margie Reckard, who was killed in a massacre at an El Paso, Texas, Walmart on Aug. 3. (Getty Images)

“I mean you didn’t even have to be there to talk to her, you could just look at how she was, how she acted, how she presented herself. She was an awesome lady. You see Margie, more or less was the brains of the family," Basco told KFOX earlier this month.

The widower added that when the duo first met, "that feeling came to each one of us, to each other, and we’ve been together ever since...we were gonna live together and die together; that was our plan.”

On Tuesday, Perches Funeral Home described Reckard as Basco's only family — and welcomed strangers to show support at her funeral services on Friday.

"He had no other family. He welcomes anyone to attend his Wife's services," the funeral wrote in a Facebook post. "Let's show him & his Wife some El Paso Love #EPSTRONG."

The funeral services will take place from 5 p.m. to 9 p.m. on Friday at Perches Funeral Home at 4946 Hondo Pass Drive in El Paso.