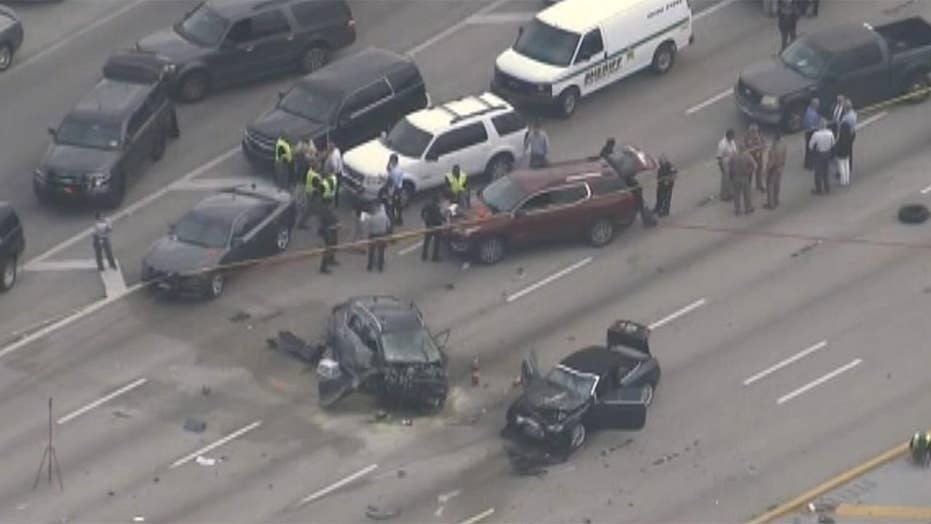 Sheriff’s deputies fatally shot a man who led authorities on a wrong-way chase on a Florida interstate Wednesday, leading to a crash that killed two people.

Authorities in Palm Beach County said the suspect reportedly shot a woman in the parking lot of a Lake Worth shopping center around 9:30 a.m. before stealing her car, a black Nissan Rogue.

“A white male suspect shot a white female, put her in a vehicle and fled the scene,” Sheriff Ric Bradshaw told reporters.

Bradshaw said deputies caught up to the suspect about 15 minutes after the shooting as he went south in the northbound lanes of Interstate 95, sparking a multi-vehicle crash in Lantana, between West Palm Beach and For Lauderdale.

“Cars were running off the road and so accidents were occurring...there were three separate accidents,” Bradshaw said.

He said the deputies approached the vehicle, before opening fire and fatally wounding the suspect, who was sitting in the driver’s seat.

Authorities told reporters the woman shot in Lake Worth died in the car during the chase.

The deputy who shot at the suspect was not injured, a Palm Beach County sheriff’s spokesperson told the Associated Press.

The suspect was not immediately identified, pending notification to next of kin.

Bradshaw said the suspect may also have been involved in a shooting in West Palm Beach on Tuesday night.

I-95 was closed in both directions in the area following the shooting.