The deadly Florida parasailing accident that killed a 33-year-old woman and critically injured her 9-year-old nephew over Memorial Day weekend was "absolutely" preventable, according to parasail safety expert Mark McColloh.

The Parasail Safety Council founder told Fox 35's "Good Day Orlando" on Thursday that the boat's captain should not have cut the tethered line, which ultimately led the victims to fall from an unknown height before being dragged through the water by the parasail until they slammed into the Seven-Mile Bridge.

"I mean, I've been in this business since the seventies and I have never trained anybody nor have I ever suggested – and I've actually experimented cutting the line in high winds throughout my lifetime in this industry and I found out that that wasn't a good idea," he explained.

"So, it was nothing I would have trained someone to do. And, I can't imagine anybody in this industry training anybody to cut the line," McColloh noted.

McColloh added that by cutting the line, the captain "lost control of the situation."

"Severe weather" including strong winds threw the Illinois family – including Supraja Alaparthi, her nephew Vishant Sadda and her son Sriakshith Alaparthi – into the bridge Monday at around 5:30 p.m. EDT, according to the Florida Fish and Wildlife Conservation Commission (FWC).

The incident reported said that a strong gust of wind "pegged" the parasail, meaning the sail was so full of air that the boat below no longer had control of the chute.

"Assuming that he was probably [in close proximity to the bridge], being pulled backwards … because the wind was so fierce that he would have lost control of the boat, let's just assume that he just saw this bridge in the background coming fast and furious, you know I would have just let the boat run into the bridge. These boats are very strong," McColloh told the station. "The equipment is very strong."

After nearby fisherman John Callion responded to the crash, the Miami Herald reported that he and two passengers took the victims to the closest restaurant for medical attention.

An FWC official and a sergeant from the Keys sheriff’s office arrived to help, as well as paramedics who pronounced Alaparthi dead at the scene.

The FWC and the U.S. Coast Guard are investigating the Florida Keys parasailing accident. 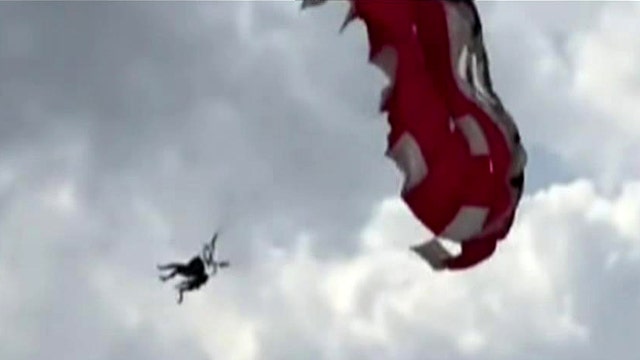 "I mean, to break a parasail you'd have to have 80-mile-an-hour-plus winds, I mean, for the panels to blow out. I mean, these are built as strong as a parachute that you would [use to] jump out of a plane," McColloh remarked, noting that tow lines now have increased strength.

"It's a terrible thing. I've seen this in high winds and it's very, very scary to be up in the air being tossed around, But, you know, I'd rather have someone be mad at me for … getting myself caught in the wind and having to do all those things than what occurred," he concluded.