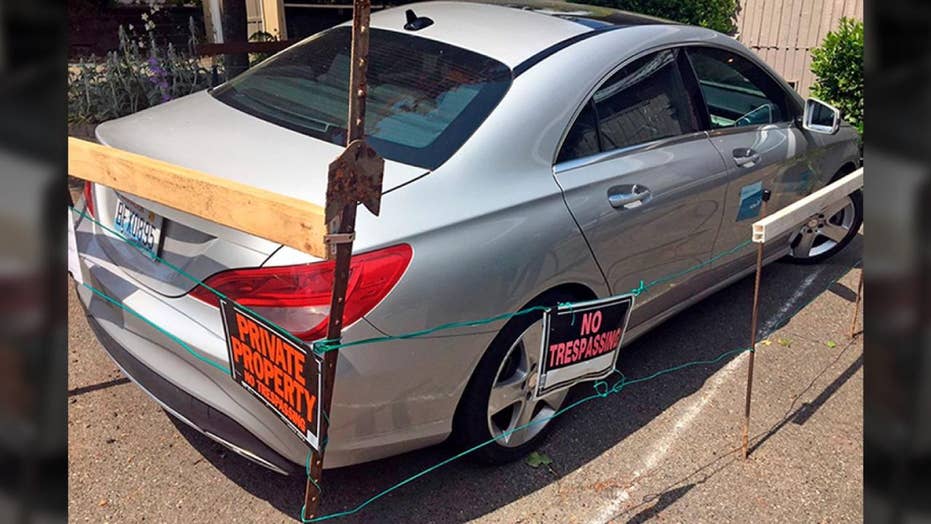 Dan Smith had it with a car-share vehicle parked illegally in his Seattle duplex’s parking lot, so he took matters into his own hands and built a barricade around it, demanding compensation from the ride-share company.

A small army of Washington, D.C. residents may soon be teaming up with police to bust owners of illegally parked vehicles -- if the city moves forward with a bill aimed at getting “more eyes on the street.”

A plan recently introduced in the District of Columbia Council calls for officials to train 80 residents on how they can use their smartphones to take pictures of vehicles illegally parked in locations such as crosswalks, bicycle lanes and in front of hydrants. The images, according to the New York Times, would then be submitted through a special app for review by city employees – and those found in violation would be sent a parking ticket, with a chance to appeal.

“We wanted to look creatively at what could be done here,” Councilman Charles Allen, the bill’s sponsor, told the newspaper.

A parking ticket on a car windshield in Washington, D.C. A plan recently introduced in the District of Columbia Council calls for officials to train 80 residents on how they can use their smartphones to take pictures of vehicles illegally parked in locations such as crosswalks, bicycle lanes and in front of hydrants. (iStock)

Allen believes the city’s current approach to handling parking violations – in which police officers sometimes show up at the scene after the offenders have left – is ineffective.

PARKING TICKET IN PENNSYLVANIA PAID AFTER MORE THAN 40 YEARS

His says his plan, which the New York Times reports would go into effect next year if passed, “helps put more eyes on the street.”

But experts are wondering if the citizen volunteers would be too snap-happy and potentially misreport people who have parked in particular areas for a reason.

“Perhaps it was an emergency situation or whatnot, or someone was in distress,” Chuck Wexler, the executive director of the nonprofit Police Executive Research Forum, told the New York Times.

A citizen parking enforcement program already in effect in Malibu, Calif., requires its 15 volunteers to undergo 96 hours of training from the Los Angeles County Sheriff’s Department.

Malibu Mayor Jefferson Wagner said in an interview with the New York Times that volunteers there dished out 9,140 tickets in 2018 and allowed police to focus their time on more serious cases.