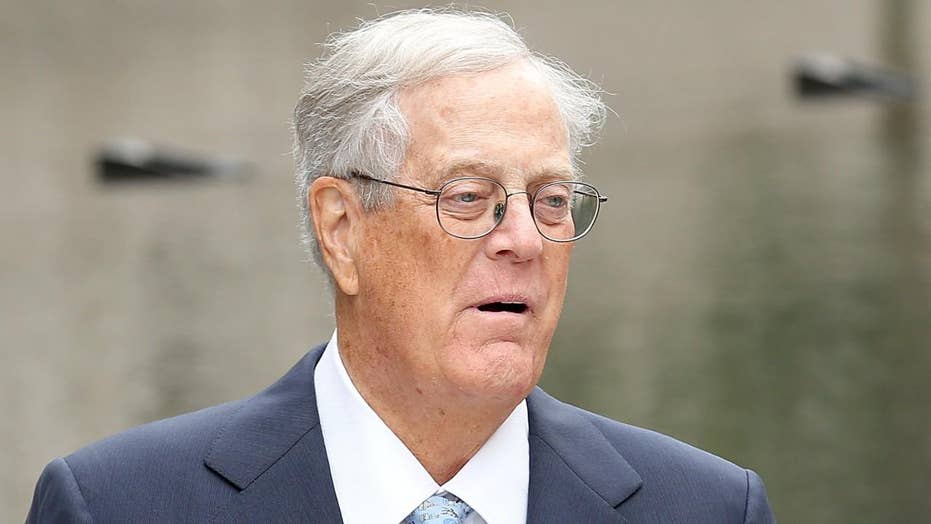 David Koch, the billionaire former executive Vice President of Koch Industries who, along with his brother, was one of the most prolific and controversial GOP donors in politics, has died, his family confirmed Friday morning. He was 79.

“It is with a heavy heart that I announce the passing of my brother, David," Koch said in a news release. "Anyone who worked with David surely experienced his giant personality and passion for life.”

Charles said David Koch's death came 27 years after he was diagnosed with advanced prostate cancer. At the time, doctors told him he likely only had a few years left to live.

“David liked to say that a combination of brilliant doctors, state-of-the-art medications and his own stubbornness kept the cancer at bay," Charles said in the statement. "We can all be grateful that it did, because he was able to touch so many more lives as a result."

According to the Bloomberg Billionaires Index, Koch was reportedly worth about $59 billion, making him -- along with his equally wealthy brother -- one of the richest people in the world. David also has two other brothers, Frederick and William, who are not involved in Koch Industries.

The Koch brothers, known for their apolitical philanthropy as well as their more contentious standing as GOP power players, had drawn the ire of President Trump after snubbing his bid for the White House in 2016.

Shortly after the election, Charles took aim at the administration’s immigration and “protectionist” trade policies, announcing that the Kochs' advocacy groups would move to distance themselves from the Republican Party and instead pursue policies with bipartisan support.

The Koch brothers announced earlier this year that they would not support Trump’s 2020 re-election bid.

The duo has been highly critical of Republicans in recent months, slamming the GOP for not doing enough to curb government spending in the $1.3 trillion spending bill adopted in March. They have specifically criticized the White House over Trump’s trade policies, which they fear could trigger a U.S. recession in addition to a looming international trade war.

David Koch was known more for his philanthropic giving, while Charles was more outspoken in politics.

“The significance of David’s generosity is best captured in the words of Adam Smith, who wrote, ‘to indulge our benevolent affections, constitutes the perfection of human nature,’” Charles wrote.

David leaves behind his wife, Julia Flesher, and their three children.

Charles added: “He will be greatly missed, but never forgotten.”