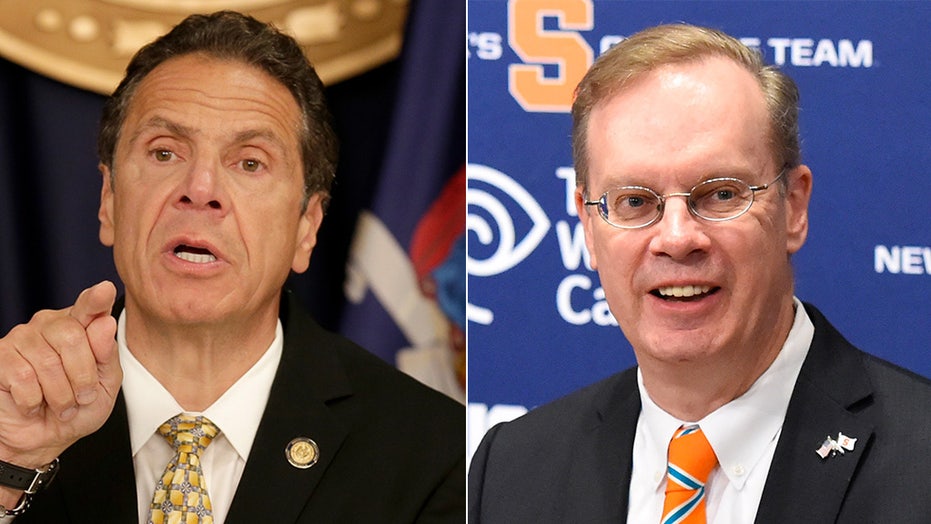 UPDATE: The Syracuse chancellor has provided new information on the case. Read it here.

Gov. Andrew Cuomo, D-N.Y., slammed the chancellor of Syracuse University on Tuesday, saying that none of his actions to combat hate crimes on campus "instills confidence" in the community and urged him to introduce an experienced monitor to address recent incidents.

Cuomo's comments came after a white supremacist manifesto was apparently Airdropped to students at a Syracuse University library on Tuesday — a day after a fraternity was suspended for alleged racism, and multiple instances of racist graffiti have been reported to campus authorities.

"The hateful activities at Syracuse University are most disturbing, not only to the Syracuse University community, but to the greater community of New York," Cuomo said in a statement. "They have no been handled in a manner that reflects this state's aggressive opposition to such odious, reckless, and reprehensible behavior. That these actions should happen on the campus of a leading New York university makes this situation even worse."

Cuomo urged Syracuse University Chancellor Kent Syverud that a monitor was necessary to both investigate and communicate the facts of the incidents with the University Board of Trustees and the State Police Hate Crimes Task Force to combat the issue.

In the meantime, Cuomo directed the State Police Hate Crimes Task Force and the Division of Human Rights to take charge of the investigations into numerous racist messages that have been found in the residence hall. He said in a statement he's "disgusted" by the hateful language and those responsible will be vigorously prosecuted.

Syverud released a series of "immediate priorities" late Tuesday, that included a chart compiling the major concerns of students regarding diversity and inclusion -- many of them commented on the lack of transparency and the need for more security measures on campus -- and committed to implementing changes in five areas.

Syverud said that the university plans to beef up saftey resources for students, clarify punishing for hate crimes and racism in the university's Code of Student Conduct, implement a course for students that discusses diversity and inclusion and make changes to faculty and staff, including hiring more staff members who specialize in "significant areas of concern."

The chancellor also added that student responses have prompted the university to immediately commit more than $1 million for curriculum development, to bolster campus efforts over the next year.

“As we undertake this important work, we face real challenges here and we operate in a fraught national climate,” Syverud said in a statement.

Over the last 10 days, the university has faced a series of seemingly racially motivated incidents of hate that have disturbed the campus community.

Tuesday's incident occurred at around 1 a.m. when multiple students who were in the Bird Library allegedly received a copy of a racist manifesto — supposedly the 74-page anti-immigrant document written by the Christchurch, New Zealand shooter — and a copy of the document was also posted on an online forum, the school's public safety department said.

On Saturday night, a black female student reported being accosted with "a verbal racial epithet from a group of students and visitors to our campus," Syverud, said in a statement.

Syverud revealed that the fraternity behind the incident was banned from campus and urged the Greek life community to band together to condemn such acts of racism.

Additionally, at least 11 racist incidents against black, Asian and Jewish people have been reported to school authorities since Nov. 7, according to the student newspaper. Students reported finding the "n-word" and a slur against Asian people in the residential Day Hall building two weeks ago. Last week, a swastika was apparently found by a student and a racial slur was reportedly yelled at a Chinese freshman on campus.