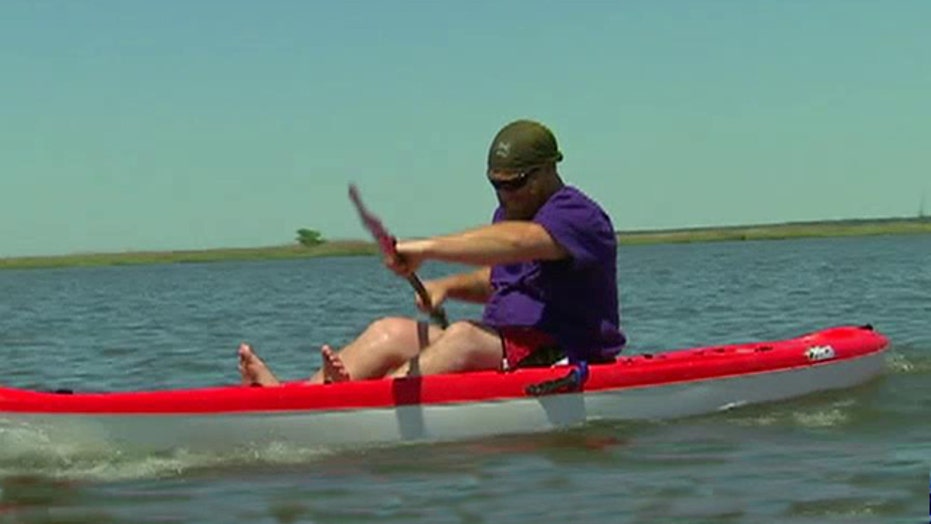 Vets kayak across South Carolina to bring attention to PTSD

CHARLESTON, S.C. – Twenty-two combat vets are paddling through the South Carolina wilderness on a rugged 175 mile course from Columbia to Charleston.

"When I first came out here, we started as a bunch of individuals just thinking we were gonna kayak," said A.J. McIntyre, a former Marine who served in Iraq. "But I tell you — over the last five, six days we've been out here — it has gotten to the point, boss, where we are brothers."

On the week-long adventure, the vets have faced heavy rains, scorching sun, cold nights and choppy waves. Many have to deal with their own chronic injuries from battle. The trip is not easy. Nor is it supposed to be.

Farmer said the number of kayakers involved is based on the average number of U.S. military veterans who commit suicide each day. The expedition is intended to generate more awareness and support for vets who suffer from Post Traumatic Stress Disorder (PTSD).

"After what these men and women have done for us, we must come to their aid and help them,” Farmer said. “There's no reason that someone should commit suicide because we haven't paid attention. We need to pay attention to our vets."

In addition to counseling veterans with PTSD, the Presbyterian minister said he also suffers from the condition. According to Farmer, the best therapy is connecting with other vets and facing challenges together, just like soldiers on the battlefield.

Joe Gonzales, a former soldier who served in both Afghanistan and Iraq, said the weeklong paddling expedition has helped his group develop strong bonds.

This afternoon, the paddlers are scheduled to arrive at the Citadel military college in Charleston, where they will be greeted with hot showers and a parade in their honor. Organizers said they hope to make the expedition an annual event.