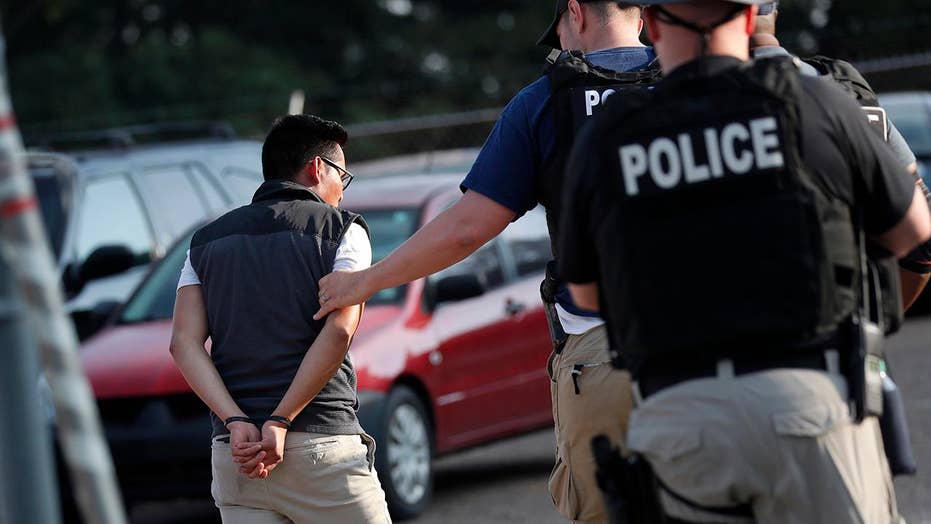 Brandon Judd says the individuals were released in order to take care of their children. He says they will still most likely be put through the deportation process.

Almost all of the Mississippi chicken plants raided by Immigration and Customs Enforcement (ICE) officials on Wednesday were "willfully and unlawfully" employing people without proper work documentation authorizing them to hold jobs in the U.S., according to unsealed court documents.

Federal investigators who executed the raid on seven plants in all arrested 680 people, drawing in part on informant information -- in what's been described as the largest immigration raid in a decade. (Roughly 30 of those arrested were released on humanitarian grounds, while another 270 were released after being processed by ICE, the U.S. Attorney’s Office for the Southern District of Mississippi said Thursday.)

An informant posing as a worker at the latter of two chicken processing plants, PH Food Inc. in Morton and A&B Inc. in Pelahatchie, told Homeland Security investigators that both are owned by a Chinese man from California, Huo You Liang, more commonly referred to as Victor by his employees in Mississippi. The informant contended that Victor, as well as managers at other plants, did not follow state regulations which require employers to utilize E-Verify, a federal electronic verification system, to validate the authenticity of work documents including identification, Social Security numbers and tax information.

"The payroll companies as well as PH Food Inc. and A&B Inc. do not verify the authenticity of their documents," the informant told investigators, according to court documents, allowing employees to use their real names supported by fake documents to get hired.

Another informant at PH Food said that the majority of the 240 employees at PH's plant as well as 80 employees at A&B's plant employed many Guatemalan immigrants lacking in proper work authorizations and documentation.

In addition, investigators gathered evidence from electronic monitoring bracelets from migrants who had previously been arrested for immigration violations -- thus barring them from employment in the U.S. -- and noted that all seven raided plants employed these immigrants illegally.

Three members of the House Oversight Committee Friday sent a letter to Attorney General William Barr and Acting Secretary of Homeland Security Kevin McAleenan asking that, among other things, documents and information be turned over showing whether the companies involved in the Mississippi raids would be facing criminal charges or other fines and penalties for hiring illegal immigrants.

The letter, signed by panel chairs Rep. Elijah Cummings, D-Md., Bennie Thompson, D-Miss., and Rep. Jamie Raskin, D-Md., requested documents on "whether any owners, employers or individuals otherwise responsible for hiring at targeted worksites were charged and the nature of those charges."

"It appears that these DOJ and ICE enforcement actions are targeting only immigrant workers and not their employers," the letter said.

Bringing criminal charges against companies that illegally hire workers is difficult because prosecutors must prove that the employer did so knowingly, a claim easily rebutted via claims of being duped by fraudulent documentation.