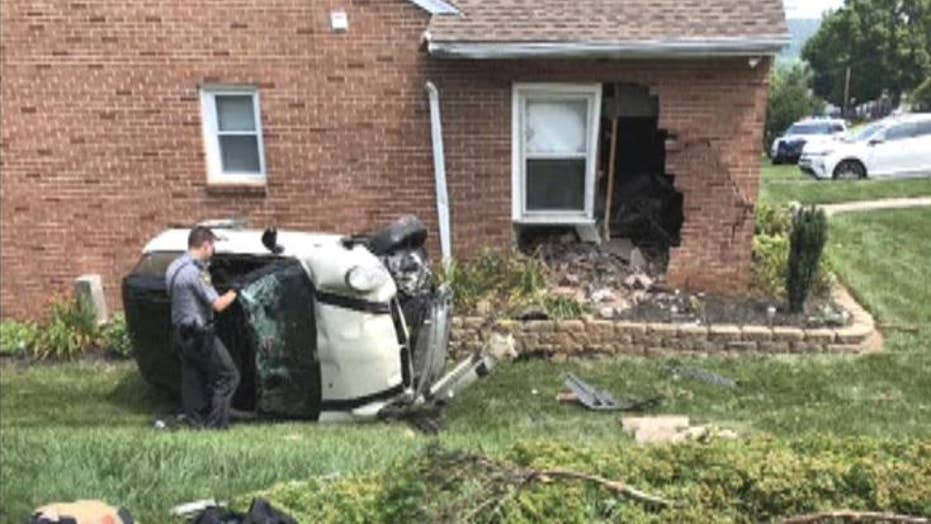 Police in Pennsylvania say a driver fleeing police lost control of the car and crashed into a house.

A York, Pa., man is facing charges after he allegedly attempted to flee authorities while driving under the influence, later crashing into a woman’s home and causing thousands of dollars' worth of damage.

On July 4, Kameron Smith was allegedly driving under the influence and fleeing authorities while driving an unregistered, uninsured Mini Cooper, FOX43 reported.

At one point during the roughly two-mile chase, Kameron Smith allegedly crossed over the southbound lane on North George Street in Manchester Township, traveled through Jennifer Smith’s yard and hit the side of her house before the car landed on its side, home surveillance footage of the incident shows. The news station reported that he was driving 80 mph when he crashed.

“At first I thought maybe a bookcase fell over or something, but it was so loud and it went on for so long that I knew someone had hit the house,"  Jennifer Smith told the news station, adding that Kameron Smith attempted to apologize before he was taken away by authorities.

The incident left a large hole in the side of the side of the house, which was boarded up by Jennifer Smith’s neighbor, who is also a contractor. Still, additional repairs are needed.

"It is very frustrating because now my homeowners insurance policy is going to go through the roof,” Jennifer Smith said, adding that she owes $1,000 in deductible costs and roughly $20,000 in damages. She is hopeful that her insurance will cover the costs.

"I'll ask for restitution as part of [Kameron Smith's] criminal charges to make sure I get at least the deductible back that I have to pay out of pocket," she said.

"But that doesn't always guarantee you're going to see your money,” she added.

Kameron Smith is now facing charges that include driving under the influence, driving under suspension, fleeing and eluding, and driving an unregistered vehicle, according to FOX43.