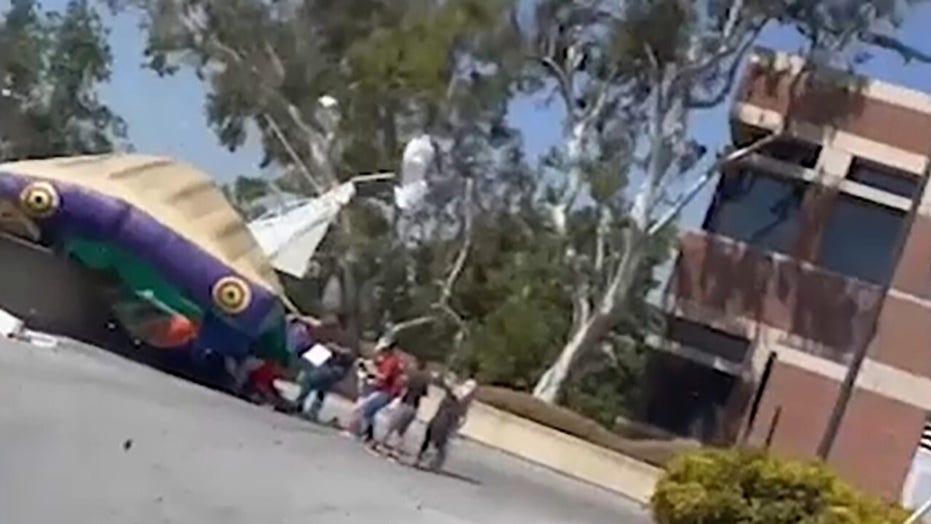 Three children were injured in southern California on Saturday after a downdraft from a sheriff’s helicopter lifted a bounce house into the air, authorities said. Video Credit: FOX11 Los Angeles KTTV

Three children were injured in southern California on Saturday after a downdraft from a sheriff’s helicopter lifted a bounce house into the air, authorities said.

The incident happened around 10:30 a.m. during an annual open house at the Rancho Cucamonga Police Department, the department said in a news release. The event included displays, food and a children’s bounce house.

At some point, a helicopter with the San Bernardino County Sheriff's Department was landing on the rooftop helipad of the police station and "the downdraft from the helicopter caused several canopies and the bounce house to lift off the ground," police said.

Three children suffered injuries when a bounce house they were inside was lifted into the air by a sheriff's helicopter flying overhead, police said. (FOX11 Los Angeles KTTV)

Video obtained by FOX11 Los Angeles shows the moment the sheriff's helicopter flies over the event and kicks up wind that appears to blow over several canopies and knock several people to the ground. As the camera pans to the left, the bounce house can be seen after apparently landing back on the ground.

The sheriff’s department is investigating the incident alongside the Federal Aviation Administration.

No further details were immediately released.