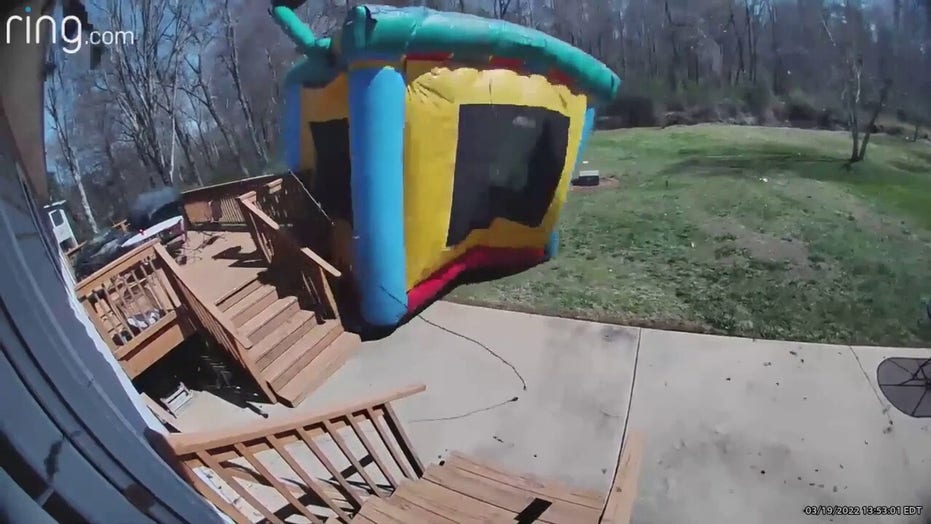 A bounce house in North Carolina nearly struck a child after a powerful gust of wind hurled it across the yard. Credit: Jennifer Beane/TMX

This was a very close call.

A mother in North Carolina posted a video to Facebook showing a bounce house coming loose in the wind and blowing across the family's backyard. The large, inflatable object nearly smashed into a small child that was nearby.

Fortunately, the empty, inflatable house only grazed him and no serious injuries were reported, according to Beane's post.

Jennifer Beane shared the footage on March 20 after it was recorded by a home security camera. Beane wrote on Facebook that she had rented the bounce house for their son's 2nd birthday party.

"I debated on sharing this but decided it needs to be shared," Beane wrote. "This Saturday (March 19), we had Maddux’s 2nd birthday party. We got a bounce house like we typically do for the big kids."

She explained that one of the kids had been riding a four-wheeler before its battery died. The child then grabbed a basketball from the yard and started walking towards the house. That's when the bounce house came loose.

Beane did not immediately respond to Fox News Digital's request for comment.

Jennifer Beane shared video on Facebook of a bounce house coming loose and nearly smashing into a child in her backyard. (iStock)

"You see him in the video as he heard the strap to the bounce house break so he was looking to see what it was," she wrote. "Then the scariest thing happens and the wind picks it up and comes straight for him. We had just (come) inside and Cooper saw it in the air from inside and screamed at us, and we all took off outside."

After the footage shows the bounce house land on the grass, adults can be seen running towards the object to ensure no kids were inside.

The post continues, "Thank the good lord everyone was safe. Michael said it grazed his head and his back but he took off running away from it. It could have been much, much worse. Please if you get a bounce house be sure to watch out for how bad the winds will be."

The CPSC says that if it's windy outside, don't use a bounce house. (iStock)

Beane concluded, "We just wanted to share what happened. We are all still shaken up about it and Michael says we can’t have anymore bounce houses in the future!"

Fox News previously reported that the Consumer Product Safety Commission (CPSC) said bounce houses should be properly staked and anchored on a flat, even surface. If it’s windy outside, people should not use a bounce house. When using a bounce house, the maximum wind speed should be no more than 15 to 25 mph, the CPSC confirmed to Fox News.