Thousands of residents in Paradise, Calif., had to use the one four-lane road leading out of town after a wildfire broke out on Thursday morning, forcing some to abandon their cars due to traffic in conditions that one person described "like a war."

Eric Reinbold, the police chief in Paradise, told The New York Times that terrain and the flow of traffic played a role in several deaths in the town. At least 29 people died in the northern blaze-- Camp Fire. An additional 228 people were unaccounted for. The wildfire-- along with the fire burning in Southern California-- now matches the deadliest blaze on record in California history.

Nearly the entire town of 27,000 residents lay in ruins and most were still barred from returning to the still hazardous town where small fires continued to flare.

The report said seven victims in the town died in their vehicles, four in an area with steep terrain. One person who fled told the paper it took about one hour to travel three miles.

"The particular area is out on a finger of a ridge, where there is a canyon on both sides,” Reinbold told the paper. "It's dense brush, dense trees. It's one way in, one way out, so it's very possible that the fire was just so intense that there was no way of avoiding that when trying to leave." 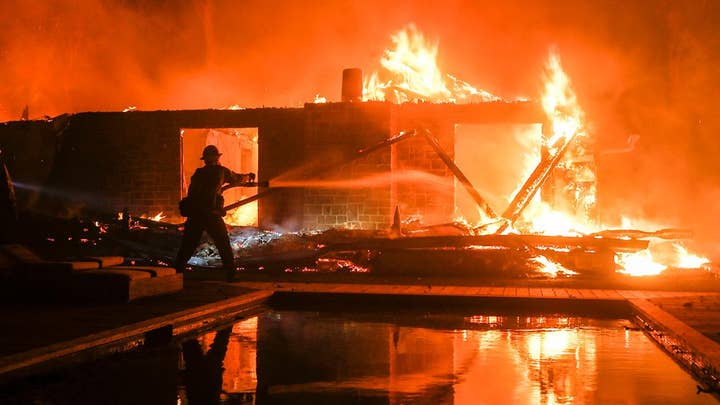 Abandoned, charred vehicles cluttered the main thoroughfare, evidence of the panicked evacuation as the wildfire tore through Thursday. The dead were found mostly inside their cars or outside vehicles and homes. Authorities called in a mobile DNA lab and anthropologists to help identify victims.

Five of the dead panicked when they couldn’t escape by car because their route was cut off by a wall of fire, said Gabriel Fallon, who rode out the blaze with his parents to care for the horses, cows and livestock on their 10-acre farm in Paradise.

One person told the paper it “sounded like a war.”

Jody Jones, the mayor of Paradise and a traffic specialist, told the Times that the town practiced an evacuation about a year and a half ago, but the fire was so intense she said, “I don’t know that you could build the infrastructure to evacuate an entire town that quickly. I just don’t know if that’s possible.”

She told the paper that many California towns are vulnerable.

Gov. Jerry Brown said California is requesting aid from the Trump administration. President Donald Trump has blamed "poor" forest management for the fires. Brown told a press briefing that federal and state governments must do more forest management but said that's not the source of the problem.

About 300,000 people statewide were under evacuation orders, most of them in Southern California.