Hundreds of firefighters worked to put out the fire that destroyed at least 20 homes and damaged at least 11, according to the Orange County Fire Authority.

The fire has spread to over 200 acres and is approximately 15% contained. There are 550 firefighters assigned to the blaze. The two who were injured were assessed at a hospital and later released.

Sherwood said the weather was predicted to become even hotter and drier over the next two days, further challenging containment efforts.

"We will continue to work diligently in all of our efforts to not only contain the fire, but to address all those that have been impacted with their homes," he said.

Captain Virgil Asuncion, who serves as the chief of police services for Laguna Niguel, said that approximately 900 residents had evacuated and that orders remained in place.

He noted that police had received more than 1,250 calls to their hotline and that roads are still closed in the area.

The Coastal Fire started on Wednesday afternoon and its cause is under investigation.

Electric utility equipment has repeatedly been linked to starting some of the state's most disastrous wildfires, especially during windy weather.

Last year, the state Public Utilities Commission approved a settlement of more than half a billion dollars in fines and penalties for SoCal Edison for its role in five wildfires in 2017 and 2018. 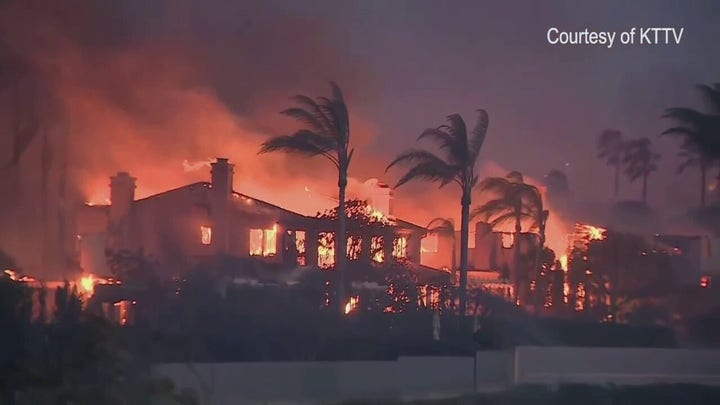 "Our information reflects circuit activity occurring close in time to the reported time of the fire. Our investigation is ongoing," the utility said.

Photos of the scene showed mansions charred by the flames and cars nearly completely melted.

"The big difference is, and we’re seeing it again with climate change. The fuel beds in this county, throughout Southern California, throughout the West, are so dry that a fire like this is going to be more commonplace," he said on Wednesday, according to Fox Weather.