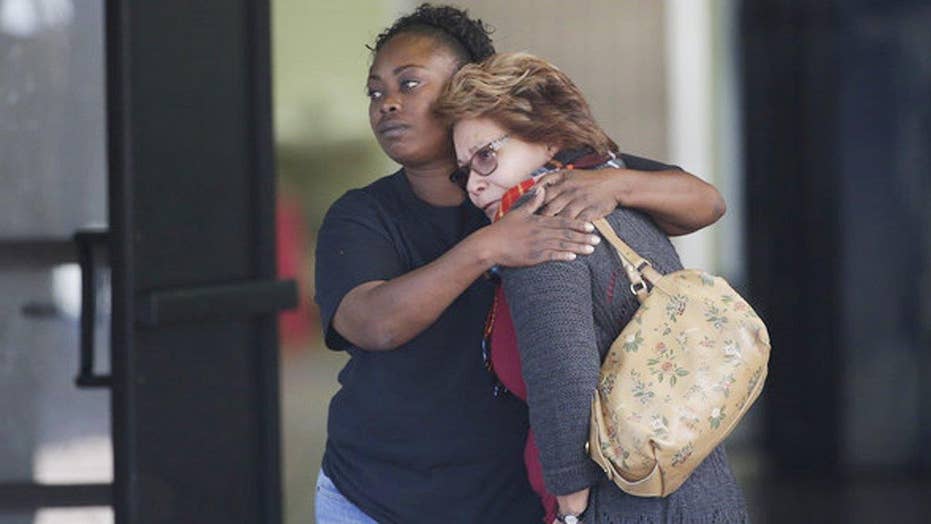 With one suspect in San Bernardino social services facility massacre shot and another possibly on the run, residents are taking cover as police search the area

An attack at a Southern California social services center Wednesday became the latest mass shooting in the United States.

Here's a look at some of the deadliest U.S. shootings since 2012:

— Dec. 2, 2015: As many as three gunmen believed to be wearing military-style gear opened fire at a social services center in San Bernardino, California, killing at least 14 people and wounding more than a dozen, authorities said. No one has been arrested in the shooting, and a motive is unknown.

— May 23, 2014: A community college student, Elliot Rodger, 22, killed six people and wounded 13 others in shooting and stabbing attacks in the area near the University of California, Santa Barbara, campus. Authorities said he apparently shot himself to death after a shootout with deputies.

— Sept. 16, 2013: Aaron Alexis, a mentally disturbed civilian contractor, shot 12 people to death at the Washington Navy Yard before he was killed in a police shootout.

— July 26, 2013: Pedro Vargas, 42, went on a shooting rampage at his Hialeah, Florida, apartment building, killing six people before being shot to death by police.

— Sept. 27, 2012: In Minnesota's deadliest workplace killing spree, Andrew Engeldinger, who had just been fired, pulled a gun and fatally shot six people, including the company's founder. He also wounded two others at Accent Signage Systems in Minneapolis before killing himself.

— August 5, 2012: In Oak Creek, Wisconsin, a gunman killed six worshippers at a Sikh Temple before taking his own life.

— April 2, 2012: Seven people were killed and three were wounded when a 43-year-old former student opened fire at Oikos University, in Oakland, California. One Goh was charged with seven counts of murder and three counts of attempted murder but psychiatric evaluations concluded he suffers from long-term paranoid schizophrenia and is unfit to stand trial.