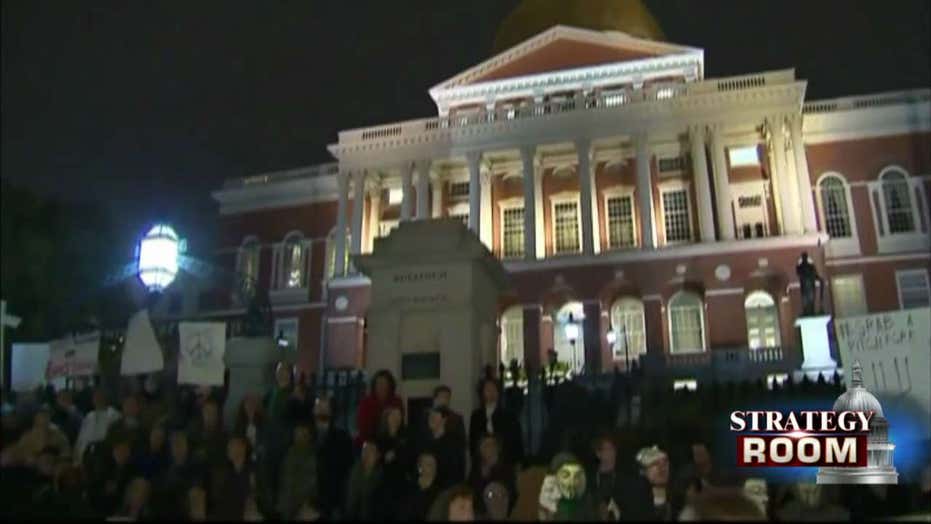 Will the Trump protests continue or die down?

Strategy Room: Jeff Lederer and Frank McCarthy discuss the protests across the country against President Elect Donald Trump and if they will continue

If you voted for Donald Trump, you may not feel welcomed at Grubhub.

The CEO of Grubhub, an online food delivery service, sent a company wide email Wednesday suggesting employees who agree with President-elect Donald Trump’s behaviors and his campaign rhetoric should resign.

“If you do not agree with this statement then please reply to this email with your resignation because you have no place here,” wrote Matt Maloney, Co-Founder of Grubhub. “We do not tolerate hateful attitudes on our team."

Maloney, a Hillary Clinton supporter, sent the email Wednesday afternoon with the subject line, “So…that happened…what’s next?” He made it clear in the email statement that he is personally stunned and deeply concerned with the results of Tuesday’s election.

“I absolutely reject the nationalist, anti-immigrant and hateful politics of Donald Trump and will work to shield our community from this movement as best as I can,” Maloney wrote about Trump’s supporters.

Maloney stands by the email, which he said many of his employees appreciated.

“I want to reaffirm to anyone on our team that is scared or feels personally exposed, that I and everyone else here at Grubhub will fight for your dignity and your right to make a better life for yourself and your family here in the United States.”

The CEO made it clear he’s particularly concerned Trump’s victory will empower others in his workplace to act out against marginalized groups.

“While demeaning, insulting, and ridiculing minorities, immigrants, and the physically/mentally disabled worked for Mr. Trump, I want to be clear that this behavior -- and these views -- have no place at Grubhub,” Maloney explained.

Adding, if it were up to him, Trump would have been fired a long time ago.

"Had he worked here, many of his comments would have resulted in his immediate termination.”

Maloney tells Fox News that  "almost 20 percent” of his employees have personally thanked him for the note. “I am not embarrassed by it,” he said.

The CEO said that he deeply respects the right of people to vote for whoever they decide, but that he simply wanted to “reassure our employees that our company will actively support diversity and inclusion -- regardless of national politics.”

This letter is noteworthy because it underscores the fine-line between the intersection of politics and business, especially given the divisive presidential campaign of the past year and a half.

Bruce Tulgan, Author of “It’s OK to be the Boss,” calls the letter “extraordinary” because while a CEO has a right to build the kind of  corporate culture he or she wants -- Tulgan advises business leaders to stay away from politics.

“Much of that message could have been communicated without making direct reference to the election,” Tulgan said of Maloney’s email. "Anytime you are talking about things that are not work at work you’re risking potentially alienating people, making people feel uncomfortable or un-welcomed at work."

Mark Horstman, co-founder of Manager Tools, says if he were advising Mr. Maloney -- he would have recommended he not send the note particularly because he's the CEO of a public company.

"That note could be construed by his employees that someone who voted for Trump could be fired," said Horstman, who suspects other CEOs have sent similar notes. "It has a chilling effect on people's perception of their rights."

While Maloney seemingly calls out Trump supporters at his company on the one hand, the young CEO boasted about the company’s supportive and inclusive culture on the other, saying he “firmly believes that we must bring together different perspectives.”

Evoking Clinton’s campaign slogan, Maloney says we are “stronger together,” and he ends his letter to his employees by echoing Clinton’s concession speech, saying Trump’s administration deserves our open minds and a chance to lead.

He ends the letter imploring his employees to “stay strong."