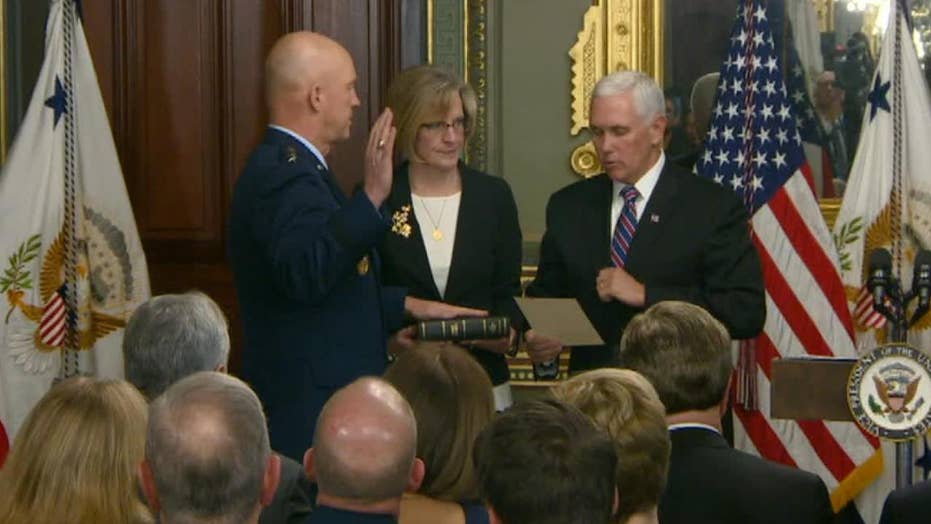 A group that focuses on preserving the separation of church and state in the military is fuming over the newly formed Space Force using a Bible to swear in its first chief of space operations.

The decision to use an official Bible to swear in Gen. John Raymond, the leader of the sixth branch of the military, is under fire from the Military Religious Freedom Foundation (MRFF).

The Washington National Cathedral held a ceremony Sunday to bless a King James Version – donated to Raymond by the Museum of the Bible in Washington – which was to be used in Tuesday's swearing-in ceremony.

The Rev. Carl Wright, the Episcopal Church's bishop suffragan for armed services and federal ministries, offered the blessing as Maj. Gen. Steven Schaick, Air Force chief of chaplains, held the Bible, according to The Washington Post.

The ceremony also included a blessing for President Trump, who pushed for the creation of the Space Force and was at first mocked for it.

"Almighty God, who set the planets in their courses and the stars in space," Wright said, "Look with favor, we pray you, upon the commander in chief, the 45th president of this great nation, who looked to the heavens and dared to dream of a safer future for all mankind."

The blessing outraged MRFF, which sent a formal complaint to Defense Secretary Mark Esper Tuesday. The MRFF is dedicated to ensuring that members of the Armed Forces have religious freedom and that their First Amendment rights are protected.

The group "condemns, in as full-throated a manner as is humanly possible, the shocking and repulsive display of only the most vile, exclusivist, fundamentalist Christian supremacy, dominance, triumphalism and exceptionalism," Mikey Weinstein, founder and president of MRFF, wrote in a statement Monday.

He said Sunday's ceremony "tragically validates the villainy of unadulterated Christian privilege at DoD and its subordinate military branches."

“The tradition of using a Bible for swearing-in dates back to the very founding of our nation, with presidents and members of Congress doing so since George Washington," Berry explained. "It is in every sense part of our historic heritage and is perfectly legal."