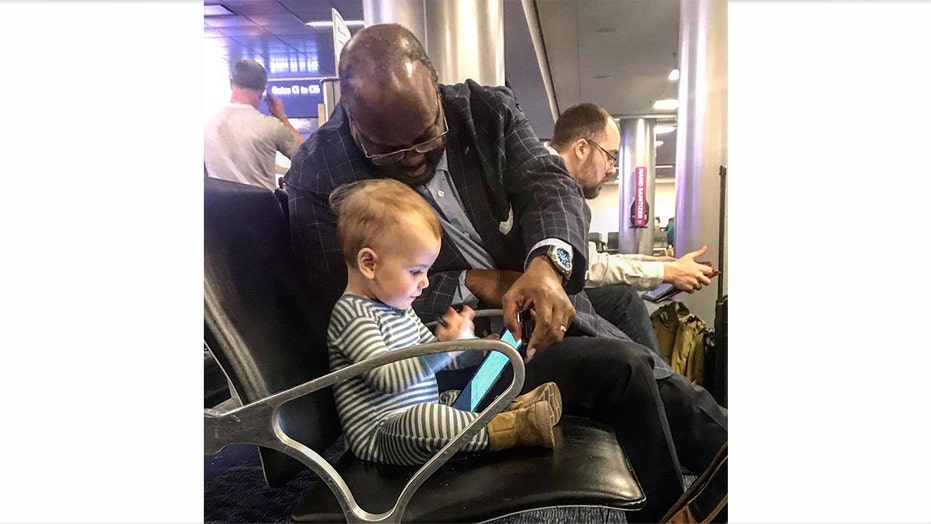 The Christmas and holiday season is synonymous with giving, sharing and helping out those in need. But for many across America, whether they be teachers, mailmen – or even Uber drivers – the desire to do good in their communities doesn’t fade away at the end of the calendar year. Here are seven acts of kindness that went viral throughout 2019.

Botham Jean’s 18-year-old brother, Brandt, hugging Amber Guyger in court after saying he forgives her for killing his brother in an emotional victim impact statement. (Fox 4)

In what was one of the most emotional photographs of the year, Brandt Jean was depicted hugging Amber Guyger inside of a Texas courtroom during her sentencing hearing for shooting and killing his brother Botham in 2018.

Brandt, in his impact statement, said he forgave the former Dallas police officer and hoped that she would devote her life to Christ.

“I forgive you. And I know, if you go to God and ask him, he will forgive you,” he said before proceeding to hug her in the middle of the courtroom.

Guyger then was sentenced to 10 years for fatally shooting Botham Jean. Brandt, in early December, received an award for ethical courage from the Institute for Law Enforcement Administration for showing compassion toward the cop during her murder trial.

A FedEx delivery man who flipped a set of stars and stripes pillows on an Ohio front porch has been hailed as a patriot after footage of the kind act went viral.

The unidentified deliverer swapped the pillows in October when he noticed they were out of order -- the stripes pillow was to the left of the stars when it should have been reversed.

The gesture was "sweet" and "extra special" to her, Jackie Szabo, the homeowner, told Fox 35, as her son is "an Airborne Soldier and a veteran in U.S. Army."

JANITOR SEEN COMFORTING AUTISTIC STUDENT WHO WAS HAVING A ROUGH DAY

Kenlee Bellew-Shaw was having a tough day at school, her mother says, until the “Angel on campus” showed up.

A school custodian at Melba Passmore Elementary School, outside of Houston, received praise in September after a photo of her laying on the floor to comfort the fourth-grader with autism was posted to Facebook.

“[Kenlee] wanted no part of being in the cafeteria this morning with all the noise so she laid down w/her blanket on the stage,” wrote Kenlee’s mother, Hollie. “When Ms. Esther saw her she came and laid next to her and patted her back.”

“All schools should be so lucky to have their own Angel on campus,” she added. The school district that employs the custodian said the scene “goes to show you that a kind word, a hug, and a little compassion are all it takes to make a huge difference in a child’s life.”

One empathetic college professor in Georgia has been praised as a “saint” after lending a helping hand to one of her students who unexpectedly couldn’t find a sitter for her young son during an 8 a.m. biology class.

Dr. Ramata Sissoko Cissé, an assistant professor at Georgia Gwinnett College in Lawrenceville, told Yahoo Lifestyle that the student asked her the night before “if she could bring the baby with her to class because she had missed a class already and did not want to be behind.”

Dr. Ramata Sissoko Cissé knew just what to say when a student contacted her anxious that she couldn’t find a sitter for their morning class the next day. (Courtesy of Anna Cisse)

Without skipping a beat, the following morning the professor offered to hold the young woman’s son when she saw her struggling to take notes during the three-hour lecture with her baby on her lap.

According to Cissé, it was simply her “mother’s instincts” that kicked in. The baby was safely strapped to the teacher’s back, where he peacefully slept for nearly the whole class.

A journalist who joined longtime U.S. Postal Service employee Floyd Martin on his final route in May captured how much he meant to the residents of Marietta, Ga.

In a viral thread on Twitter, the reporter documented how several people on his route spoke of Martin’s kindness, saying he would often go above and beyond what was asked of him. He would feed the pets along the route, bring newspapers to doorsteps, and offer lollipops to the children. One girl even dressed up as Martin on her school career day.

On his last day, people on Martin’s route decorated their mailboxes with ribbons, balloons and congratulatory signs wishing him the best and writing, “We love you.” Then at the end of the shift, more than 300 people gathered in the neighborhood for a surprise block party in his honor.

PHOTO OF TODDLER, STRANGER BONDING IN AIRPORT SWEEPS THE INTERNET

Parent Kevin Armentrout says an experience his daughter had at an airport in February shows “what kindness and compassion looks like.”

In a Facebook post that was liked nearly 300,000 times, Armentrout wrote that while waiting to board a flight, his daughter “was being her usual inquisitive self, wanting to meet and say ‘hi’ to everyone she could, until she walked up to this man.

“He reached out and asked if she wanted to sit with him,” Armentrout continued. “He pulled out his tablet and showed her how to draw with it, they watched cartoons together, and she offered him snacks. This wasn’t a short little exchange, this was 45 minutes.”

The father posted a picture of his daughter and the man, named Joseph, bonding, and said “watching them in that moment, I couldn’t help but think, different genders, different races, different generations, and the best of friends.”

A generous Uber driver in New York helped a fast-food employee who had been a passenger in her car after learning she was waiting until Christmas to buy new clothes.

“During the whole ride, she was talking about how she takes care of her grandkids and how she hasn’t had money to buy herself anything in so long and she was actually going to wait until Christmas,” Lamiyah Jabbar said in a video posted to Instagram in August.

Lamiyah Jabbar decided to do something special for one of her passengers.

Jabbar dropped the woman, Diane, off at a Tim Hortons in Buffalo and says she then went to Old Navy to buy her a dress and also picked up a $50 Visa gift card.

Jabbar later returned to the restaurant and gave the gifts to Diane, who appeared stunned by the random act of kindness. On camera, Diane could be heard saying “Thank you so much. This has been such a horrible day and you just made it so much better.”