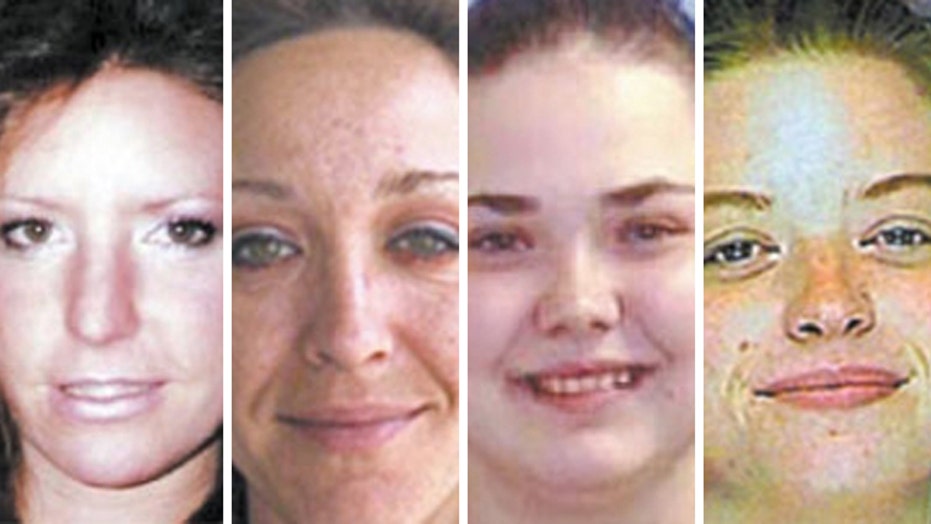 Search widens in the hunt for a possible serial killer

Investigators hunt for clues in the unsolved murders of four women

Atlantic City, N.J. – While millions of tourists flock each year to the boardwalks and casinos of Atlantic City, a dark question looms over this glittery city: Who murdered four women and dumped their bodies in a drainage ditch on the outskirts of town nearly seven years ago?

No arrests have ever been made, but authorities tell FoxNews.com they are quietly and aggressively working the case – contacting police in Florida, Missouri and Alaska in recent months for possible connections to killings there.

On Nov. 20, 2006, two women stumbled upon the body of 35-year-old Kim Raffo – lying face-down in run-off water filled with fecal matter and chemical waste about 50 yards behind the Golden Key Motel in West Atlantic City.

The call to police that followed uncovered a ghastly scene: the bodies of three other women, also in the ditch – their remains separated by no more than 50 yards.

Raffo, Tracy Ann Roberts, 23, Barbara Breidor, 42, and Molly Dilts, 19, all worked as prostitutes in the area. The women were also mothers who had fled dysfunctional lives and found themselves walking the streets of Atlantic City and booking clients to make money and, in some cases, feed drug addictions.

Dilts, who was killed a month prior to being found, was so badly decomposed that a cause of death could not be determined. The same was true for Breidor. Roberts was asphyxiated, authorities determined, and Raffo – the most recent victim – was strangled with a rope or cord. The women were barefoot, but fully clothed – their heads facing East toward the lights of the casinos. The medical examiner detected high levels of a recreational drug in three of the bodies.

Police have never named a suspect in the case. But McClain said authorities have identified “more than one” person of interest, though he declined to provide names.

Terry Oleson, a 41-year-old handyman from Alloway, N.J., was of great interest to police from the beginning. Oleson, who said he is innocent, was living in the Golden Key Motel – a seedy lodging notorious for drugs and prostitution – at the time of the murders. Oleson told FoxNews.com that he was repairing a friend’s porch in the area and needed a place to stay nearby because his home in Alloway was some 60 miles away. Oleson lived in a room at the Golden Key for free in exchange for doing occasional repairs on the motel’s sinks and toilets.

After watching news of the murders on television, Oleson’s then-girlfriend called police and implicated him in the crimes. Oleson said the two were in a domestic dispute and on the verge of breaking up, calling her actions vindictive.

Oleson said he was interrogated by police without a lawyer for up to eight hours – during which he claims police said, “We know you did it.”

When detectives arrived at Oleson’s home in Alloway, they discovered hidden video cameras that only heightened their interest. One camera, inside the home, captured the teenage daughter of Oleson’s girlfriend in various stages of undress, according to investigators. Oleson said he was not aware of such images at the time, and later pleaded guilty to an "invasion of privacy" charge.

Oleson submitted DNA samples to authorities, but no forensic match has been made between Oleson and the victims, according to his attorney, James Leonard.

“To date, we’ve never heard what the results are but I think you can draw those conclusions,” said Leonard, who, with Oleson, spoke to Fox News in a sit-down interview. “We wouldn’t be sitting here today if Mr. Oleson’s DNA linked him in any way, shape or form to any of these women.”

“I think he [Oleson] presented an easy target to them,” Leonard said.

Adding to the mystery, self-described sex worker, Denise Hill, identified another individual as the killer – a man named Eldred Raymond Burchell, who called himself the “River Man,” an apparent reference to Washington state’s “Green River Killer,” who murdered at least 71 women – many prostitutes – during the 1980s and 1990s.

Hill told FoxNews.com that Burchell, a drifter, spent time with her in Atlantic City around the time of the murders and confessed to killing people. Burchell, whose whereabouts is unknown, could not be reached for comment.

McClain said a common myth about serial killers is that they cannot stop of their own volition – a mistruth that has some convinced the killer is either incarcerated or dead.

“It is not unknown or even rare for serial killers to engage in a series of killings, which qualify as serial murders, and they do stop – either because they have no more opportunity or because they deal with the root cause of why they kill in a different way,” McClain said.

He also addressed common perceptions that police agencies care little about the disappearances and deaths of those who work in the sex trade.

“No one should ever think that because someone works as a prostitute or works in the sex trade that they’re not going to get law enforcement’s best efforts. Everybody counts. Every person’s a child of God. We are never going to give up on it until we charge and convict someone,” said McClain, the third prosecutor to take office since the 2006 murders. “I have great hope in justice. I’ll never give up on that.”

Kate D’Adamo, spokeswoman for the New Your-based Sex Workers Outreach Project, said it’s likely other women encountered the killer but did not report it to police for fear of a prostitution arrest.

D’Adamo said that, despite societal opinion, sex workers “span every different identity that you could ever imagine” – and that their decision to enter the trade is almost always an economic one.

“I think we should strive to live in a society where we don’t qualify the victims and decide based on our moral judgments whether or not they should have access to justice,” she said.

Anyone with information on these murders is urged to call the Atlantic County Prosecutor’s Office at 609-909-7800 or go to the prosecutor’s office website at http://www.acpo.org/tips.html and provide information by filling out the form anonymously on the "Submit a Tip" page. Individuals can also call Crime Stoppers at 609-652-1234 or 1-800-658-8477 (TIPS). Crime Stoppers offers cash rewards for information leading to the arrest and indictment of those who commit crimes in Atlantic City.

E-mail this reporter with news tips at cristina.corbin@foxnews.com.