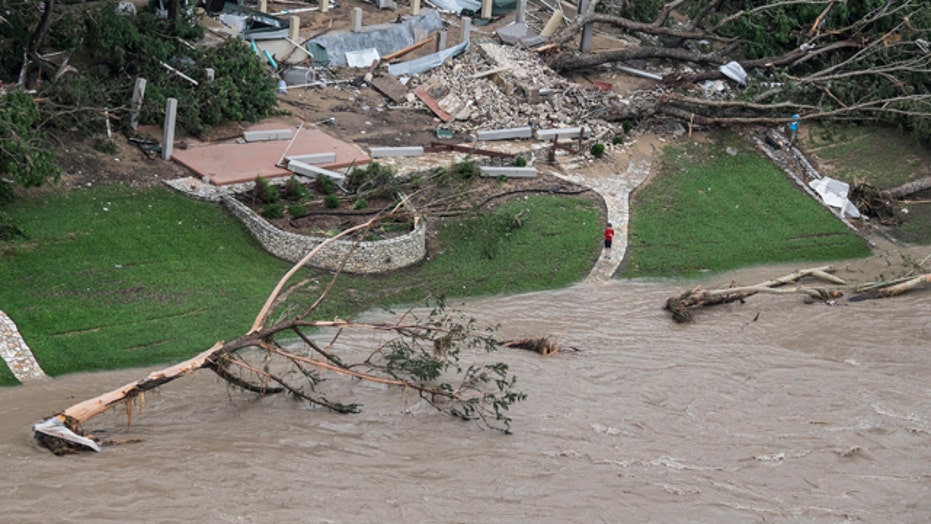 Two people were confirmed dead in Oklahoma. where a firefighter was swept to his death while trying to rescue people from high water and a woman in Tulsa died in a traffic-related crash. In Texas, a man's body was recovered from a flooded area along the Blanco River, which rose 26 feet in just one hour and left piles of wreckage 20 feet high, authorities said.

In Wimberley, Texas, southwest of Austin, eight people were reported missing, including three children, according to KXAN. A total of 12 people are missing in the region.

"It looks pretty bad out there," said Hays County emergency management coordinator Kharley Smith, describing the destruction in Wimberley, part of a fast-growing corridor between Austin and San Antonio. "We do have whole streets with maybe one or two houses left on them and the rest are just slabs," she said.

Between 350 and 400 homes were destroyed in Wimberley, many of them washed away, Smith said. In nearby San Marcos, flooding had damaged about 300 homes, she said. Kenneth Bell, the emergency management coordinator in San Marcos, said the damage in Hays County alone amounts to "millions of dollars."

Authorities also warned people to honor a night-time curfew and stay away from damaged areas, since more rain was on the way, threatening more floods with the ground saturated and waterways overflowing.'

At a news conference, Abbott says the damage he saw during a fly-over Monday was "absolutely massive" from the storms' "relentless tsunami-type power."

He stressed that communities downstream need to monitor flood levels and take seriously the threat of the ongoing storms.

The governor added 24 counties to his state disaster declaration, bringing the total to 37 counties in mostly the eastern half of the state. That allows for further mobilization of state resources to assist disaster-struck communities.

Rivers rose so fast that whole communities woke up Sunday morning surrounded by water. The Blanco crested above 40 feet, more than double its flood stage of 13 feet, swamping Interstate 35 and forcing parts of the busy north-south highway to close. Rescuers used pontoon boats and a helicopter to pull people out.

"I was thinking that we were all going to die," Josie Rodriguez told Fox San Antonio. "We were all crying, everyone was crying."

Dallas also faced severe flooding from the Trinity River, which was expected to crest near 40 feet Monday and lap at the foundations of an industrial park. The Red and Wichita rivers also rose far above flood stage.

Heather Ruiz returned from work early Sunday to ankle-deep water and a muddy couch inside her home in San Marcos. She wasn't sure what to do next. "Pick up the pieces and start all over I guess. Salvage what can be salvaged and replace what needs to be replaced," Ruiz said.

In northeast Oklahoma, Capt. Jason Farley was helping rescue people at about 11:30 p.m. Saturday when he was swept into a drainage ditch. The body of the 20-year veteran was recovered an hour and a half later, Claremore Fire Chief Sean Douglas said.

According to Fox 23, Farley was helping a rescue operation at a home during a girl's 5th birthday party. All of the attendees, which included children and one adult, were rescued through a window.

"He's our hero. That's for sure," the 5-year-old's grandfather Steven Darnell told Fox 23. "It could have been our grandkids or my daughter. I pray for his family and the other firefighters. They're like family to each other."

This May is already the wettest on record for several cities in the southern Plains states, with days still to go and more rain on the way. So far this year, Oklahoma City has recorded 27.37 inches of rain. Last year the state's capital got only 4.29 inches. It also set a new monthly rainfall total this weekend -- 18.2 inches through Saturday, beating the previous one of 14.5 in 2013.

Wichita Falls was so dry at one point that that it had to get Texas regulatory approval to recycle and treat its wastewater as drinking water dried up. By Sunday, the city reached a rainfall record, nearly 14 inches so far in May.

The reasons for the deluge include a prolonged warming of Pacific Ocean sea surface temperatures, which generally results in cooler air, coupled with an active southern jet stream and plentiful moisture from the Gulf of Mexico, said Meteorologist Forrest Mitchell at National Weather Service office in Norman, Oklahoma.

"It looks like the rainfall that we're getting now may actually officially end the drought," that has gripped the southern Plains states for years, Mitchell said, noting that moisture now reaches about two feet below the surface of the soil and many lakes and reservoirs are full.

About 1,000 people were evacuated in Central Texas, where rescuers pulled dozens of people from high water overnight.

Tami Mallow, 41, gathered her three cats at a shelter in San Marcos while her husband put furniture on cinderblocks, and retreated to the second floor with electronics and other valuables as the floodwaters entered.

"He told me there was 2 inches of mud," Mallow said. "I don't know what the cleanup process is going to be."

Five San Marcos police cars were washed away and a fire station is flooded, said Kristi Wyatt, a spokeswoman for San Marcos, which imposed a curfew starting at 9 p.m. Sunday.

A tornado briefly touched down in Houston, damaging rooftops, toppling trees, blowing out windows and sending at least two people to a hospital. The weather service said the tornado struck with winds of about 100 mph at around 6:30 a.m. Sunday. Fire officials said 10 apartments were heavily damaged and 40 others sustained lesser damage.

Some 50 miles north of the city, about 1,000 people were preparing to spend the night away from home. The Montgomery County Office of Emergency Management issued a mandatory evacuation order to more than 400 homes near an earthen dam at Lake Lewis that was at risk of failing due to the heavy rains.

Spokeswoman Miranda Hahs said the dam owned by Entergy Texas is holding, but that it was not clear when residents would be allowed to return home.

Colorado also was water-logged. A mandatory evacuation notice was issued Sunday for residents in the northeastern city of Sterling, and several counties planned to ask the governor for a disaster declaration.

The storm system pushed northeast into Iowa and Illinois on Sunday after it moved through parts of Colorado, central and North Texas and most of Oklahoma. New flash flood watches were issued Sunday for western Arkansas, Missouri and parts of Kansas, and tornado warnings were issued Sunday night for parts of Illinois, Iowa, Kansas and Missouri.