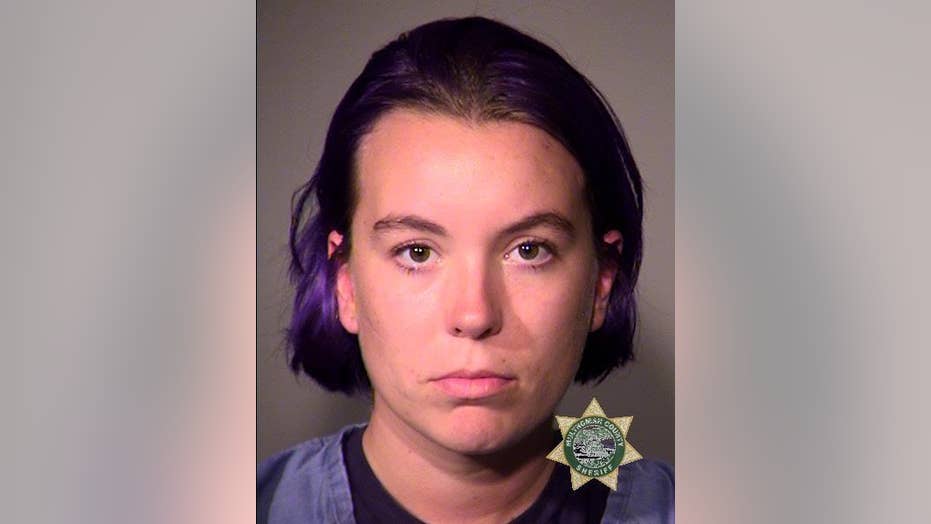 At least three people were arrested and several others were reported injured, as members of Antifa and other leftist groups clashed with members of the Proud Boys and other conservatives around downtown Portland, Ore., on Saturday, police said.

One of those injured was Andy Ngo, a conservative writer who appeared to have been attacked by Antifa members, the Oregonian reported. Ngo later posted a photo of himself from a hospital, with bruises, cuts and scratches on his face.

Some of the demonstrators turned violent, throwing milkshakes said to be mixed with quick-drying cement, raw eggs and pepper spray. The gatherings were deemed "civil disturbance and unlawful assembly" by the Portland Police Bureau and the perpetrators were believed to include members of both sides.

Maria C. Dehart, 23, was arrested during an Antifa protest and charged with disorderly conduct and harassment Saturday. (Portland Police Bureau)

"During today's events, there were multiple assaults reported, as well as projectiles thrown at demonstrators and officers," the police said in a statement. "There were also reports of pepper spray and bear spray being used by people in the crowd. Officers deployed pepper spray during the incident. There were reports of individuals throwing 'milkshakes' with a substance mixed in that was similar to a quick-drying cement. One subject was arrested for throwing a substance during the incident."

Portland Fire Medics were embedded with the Portland Police Bureau members and treated eight people, including three police officers during the even, the Oregonian reported.

"Three community members received treatment at area hospitals after they were assaulted with weapons. Two officers were pepper-sprayed during the incident and were treated. Another officer was punched in the arm by a demonstrator and sustained non-life threatening injury. Another officer sustained a non-life threatening head injury from a projectile," the statement said.