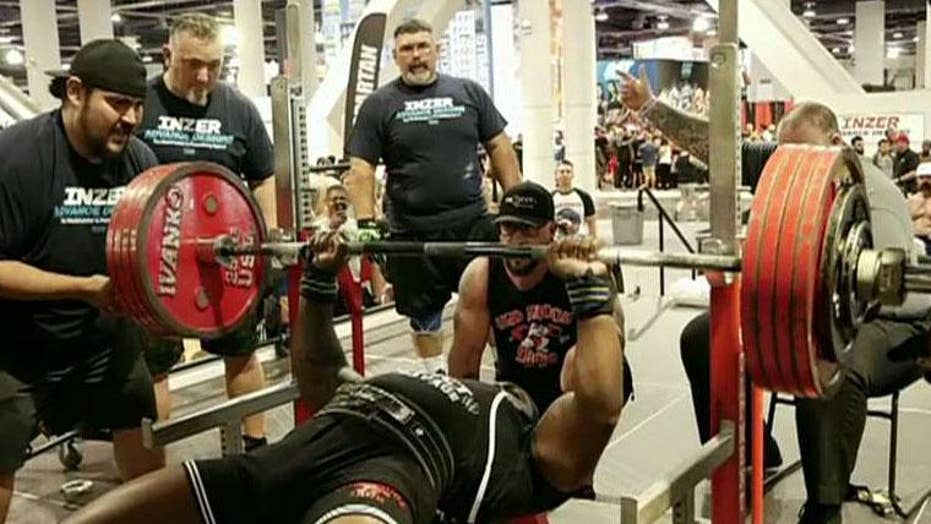 Air Force Tech. Sgt. Kenneth Cook is a man of many strengths.

He's an Airman who has deployed multiple times, including flying 20 combat missions over Iraq and Afghanistan to refuel 108 aircraft as a boom operator. He's a husband and father to two sons. He's also a powerlifter with one goal: set as many personal records as he can.

Cook is physically one of the strongest men you'll ever meet. The Florida native recently broke the world record for an unassisted, or raw, bench press at the annual Olympia Pro Powerlifting Competition in September in Las Vegas. He benched 551 pounds while weighing 218 pounds and competing in the 198- to 220-pound weight class. The previous world record was 534 pounds.

But Cook learned a different kind of strength growing up from his mom, a single parent who worked several jobs to keep food on the table and take care of her kids.

"My first acknowledgment of what strength was, was mental strength in seeing my mom do everything she could to take care of us," Cook told Fox News. "Not once did she complain about the situation she was in."

The youngest of three, with two older sisters, Cook said he grew up in a neighborhood outside Orlando where a life of crime was an easy way to make money. He was surrounded by people who had money and cars, and he idolized drug dealers and criminals. Cook ended up in and out of juvenile detention halls and later jail throughout his teens.

"I got into a lot of trouble I put myself in," he said, "from me not finding my way and not knowing who I really was."

While he wasn't an angry young kid, he used any anger he did have as an excuse to act out.

"One of the teachers in class said if you don't pay attention in school, you'll end up flipping burgers at McDonald's," Cook recalled. "My mom worked at McDonald's a large majority of my life. I took that as an insult and took it to heart."

US DROPPED MORE BOMBS IN AFGHANISTAN LAST MONTH THAN ANY TIME SINCE 2010: AIR FORCE

During what ended up being the last time he was in jail in Florida, he was lucky enough to meet a man who ultimately set him on the right path.

"One of the guards taught me what being a man was all about," Cook said. "He talked about growing up, about using the positive people in your life and trying to discard the negative people. Misery loves company, and a lot of the guys I grew up with were just that -- misery. Criminal acts were all they knew."

Something else the prison guard mentioned? The military.

"He talked to me about the Marines, the Army, the Navy, the Air Force -- I knew I had to change my life," Cook said.

Cook, then with the 6th Air Refueling Squadron, poses for a photo inside a KC-10 Extender at Travis Air Force Base in 2017. (U.S. Air Force photo/Tech. Sgt. James Hodgman)

In 2006 he joined the Air Force, an opportunity for which he is perpetually grateful, Cook said.

"Ever since then I've been trying to excel in every way I could," he pointed out.

He has met incredible people -- from his leadership to his peers, and all forms of family. "Blood makes you related, but loyalty makes you family," according to Cook.

The military is also how he met his wife, Tech. Sgt. Asia Cook. The couple has two sons, 1 and 4 years old.

Cook has served for more than 13 years in the Air Force, six of those in the security forces field, during which he deployed three times in support of Operations Iraqi Freedom and Enduring Freedom.

He landed at Travis Air Force Base in California in April 2014, where he currently serves as a boom operator, or in-flight refueler, for the 60th Operations Group.

His job is to refuel military aircraft, whether a fighter jet or a bomber, while it's in the air, "so they can get to wherever they need to go." He describes it as a "mobile gas station in the air."

Cook has completed more than 101 convoy missions and 110 combat flying missions in the air -- a significant milestone.

He started lifting weights when he first joined the military in 2006. Even though the Air Force is sometimes jokingly referred to as the "Chair Force," "everyone is striving for greatness," Cook said.

He met a technical sergeant at Joint Base Pearl Harbor-Hickam in Hawaii who became his mentor and big brother. The humble, "walking tree stump" of a man -- 5-foot-6 and weighing 220 pounds -- taught Cook about lifting.

When he arrived at Travis Air Force Base in 2013, two powerlifters approached him in the gym and told him his strength was impressive, "but your form is horrible," Cook recalled.

They taught him the basics of the sport, which includes the bench press, back squat and deadlift. When he participated in his first competition at Old Skool Iron gym in 2014, he took second place.

Since then he says he's been "eating weights."

"Every time I touch a platform I've been humbled and grateful, because of the people around me" who are supportive and encouraging, Cook says. And he's good -- Cook has placed first in every competition since 2014, including last week when he set a new California state record, benching 556 pounds while weighing 224 pounds.

The camaraderie of both the military and powerlifting is something that keeps him humble and driven, Cook said.

"Now I want to set as many records as I can, but I'm not focused on setting records. I get more pride from people wanting to learn from me," he said. "Records and lifting weights are great, but it's the people and the smiles, looking into the crowd -- that's the most gratifying feeling."

While he's not making money off his lifting skills, he's "good on my fortune from the people around me," Cook said.

"At home [in Florida], I was doing everything the wrong way for recognition. Now I'm doing things the right way, and leaving a legacy for my sons," he said. "Whether you lift weights or do underwater basket weaving, it doesn't matter. I just want them to see that their dad strived and fought for something, and he did it."