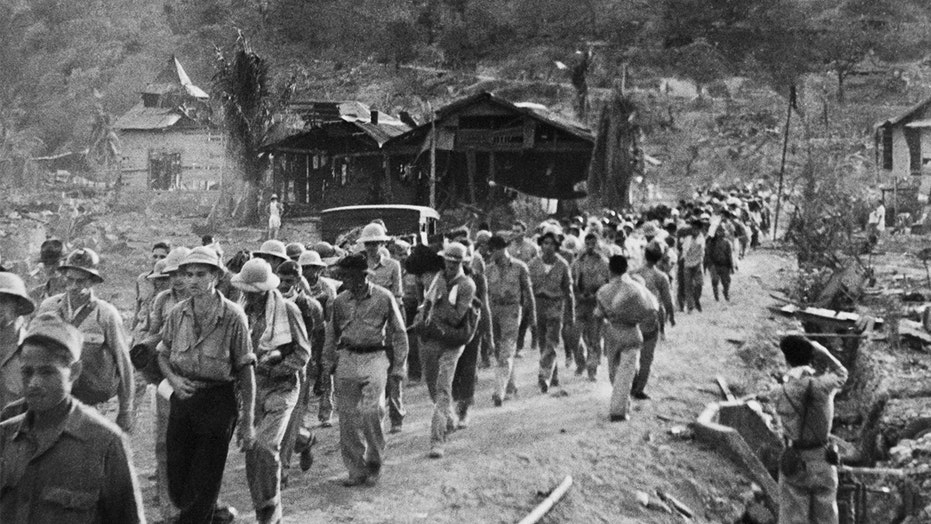 An airman who felt compelled to honor thousands of military members who fought in the Philippines during World War II walked the streets of Las Cruces, N.M., over the weekend after an annual march to commemorate them was canceled because of the coronavirus.

David Saenz, 21, a U.S. Air Force air traffic controller stationed at Holloman Air Force Base in Alamogordo, was seen on social media holding a Prisoners of War flag Sunday. He was slated to participate in the annual Bataan Memorial Death March, which draws thousands to the White Sands Missile Range each year.

"I didn't go out on Sunday for people to say thank you or to honk at me or for my own self-recognition because that defeats the whole purpose of what the Bataan March [represents]," Saenz told the Las Cruces Sun-News. "People always say they're never forgotten but I like to put action into those words because it brings more meaning to me."

The 26-mile event was founded in 1989 by the ROTC Department at New Mexico State University. The march honors American and Filipino soldiers who were forced by the Japanese Imperial Army to march 65 miles through arduous conditions. Many were tortured along the way or killed.

The march was named the Bataan Death March because of the high number of brutal and gruesome deaths along the road.

Organizers canceled the event amid the coronavirus pandemic, which has prompted the cancellation of virtually all events with mass gatherings across the country.

Airman David Saenz, 21, is seen holding Prinsoers of War flag while walking the streets of Las Cruces, N.M to honor the men who participated in the Bataan Death March during World War II.  (Facebook / Julie Wojtko)

Saenz said he's participated in the march twice and noted he trained for several months for this year's trek. He said he ran 16 miles with a 35-pound rucksack on Sunday, the newspaper reported.

"I didn't do the full marathon, which is 26 miles, but I did run 16 miles," he told the paper. "In the actual event you can do light or heavy. I've done the heavy division before with a pack of 35 pounds. I loaded up 35 pounds in my rucksack and I carried the POW flag because it made it more noticeable. That was my whole intent to show everyone that they're not forgotten."