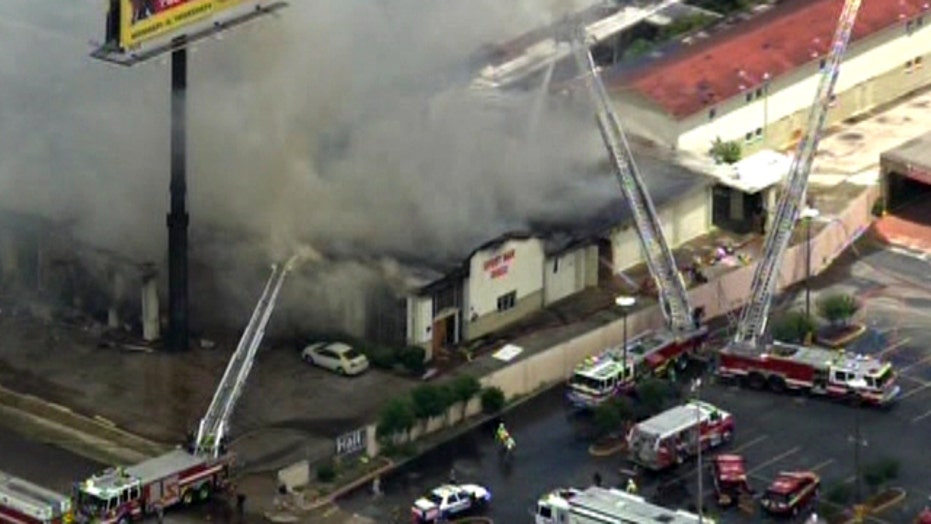 Four Houston firefighters died Friday while responding to a massive 5-alarm fire at a motel, a city official told FoxNews.com.

The local medical examiner's office says three victims died at the scene, while the fourth died at a hospital. Six others were injured, one critically, and are hospitalized.

MyFoxHouston.com reported that over 100 firefighters battled the blaze in sweltering temperatures.

The fire broke out just after noon Friday at a restaurant and club at the Southwest Inn on U.S. 59, one of Houston's most heavily traveled expressways. Flames spread to the motel part of the building and were still shooting from the roof of the structure more than an hour later.

Jeff Caynon, the president of the Houston Professional Fire Fighters Association, told The Houston Chronicle that reports from the field indicated that firefighters were injured in a roof collapse.

"The roof collapsed," he told the paper. "I don't know if that was folks outside next to the structure or inside when it collapsed, but the collapse is going to be the cause."

Houston Fire Chief Terry Garrison says the four were looking for people they thought were still trapped in the burning building.

Houston Mayor Annise Parker says that of six other firefighters injured, one was in critical condition.

No cause for the blaze was immediately announced. Phone messages left with the fire department weren't immediately returned.

Temperatures in the low 90s and high humidity hampered firefighting efforts, and smoke from the fire snarled traffic on the expressway.

The 100 Club, a Houston-based non-profit organization that supports the dependents of firefighters and law enforcement officers killed in the line of duty, announced it will provide financial assistance for the victims' families.

"It's a very sad day for the Houston Fire Department and the city of Houston as a whole," said Janice Evans, a spokeswoman for Houston Mayor Annise Parker.