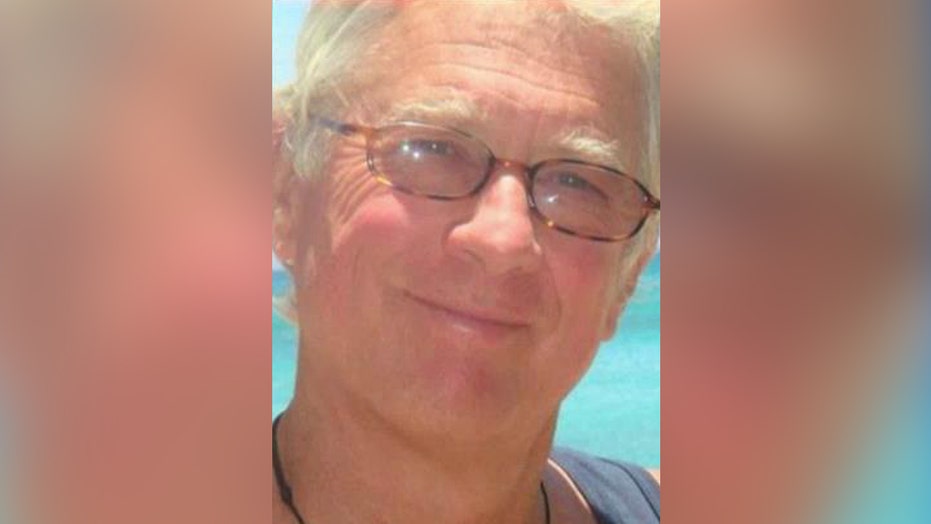 Detectives in California said Tuesday they are looking for three persons of interest in the killing of a man found shot on a hiking trail with his wounded dog attached to his hand by a leash.

Marin County sheriff’s investigators released surveillance video that shows two of the three people they want to question in connection with the shooting of Steve Carter, 67. The footage, taken from a convenience store in Fairfax near the trail where the body was found, shows a long-haired man wearing a black hat and a woman with dirty-blond hair wearing dark clothing.

Carter’s body was found Monday along the trail 20 miles north of San Francisco, the Marin County Sheriff’s Department said. He was still holding onto the leash of a Doberman Pinscher, believed to be his dog, Lt. Doug Pittman said. The dog survived its injuries and was turned over to the Marin Humane Society, he said.

Carter's brother, Michael Carter, told the San Francisco Chronicle: "I've heard that he was murdered, but I haven't heard anything other than that."

Carter said that he knew of no one who disliked his brother. "I can't imagine that it's anything other than a random thing. All of it seems very random and unbelievable. Nothing makes any sense," he said.

The Chronicle reports the motive for the killing remains a mystery as law enforcement officials searched for clues behind the murder. The killer or killers are believed to have fled the scene in Carter’s 2003 Volkswagen Jetta station wagon.

Anyone who spots the car should treat the occupants as armed and dangerous, Pittman said.

Carter and his wife Lokita founded the Ecstatic Living Institute based in Middletown, Calif. He was a Tantra teacher and participated in numerous training sessions across the country, in Canada and Costa Rica. The couple released DVDs on Tantric massage, yoga for lovers and medication. They also taught classes at Harvin Hot Springs, a clothing-optional retreat in the Middletown mountains that burned down last month in Lake County’s devastating wildfire, according to the newspaper.

Logan Rose, director of the Ecstatic Living Institute, said the Carters recently led retreats for couples in Costa Rica and had come to Marin County so Lokita could undergo treatment for breast cancer.

"It has been a very traumatic season for us with Lokita's cancer, then the Valley Fire that destroyed our beloved Harbin Hot Springs where we offered the majority of our workshops," Rose said. "This is the most devastating blow. We are heartbroken."

Pittman said sheriff’s deputies had checked on a report of gunfire about 45 minutes before the body was discovered. However, the report took officers to a nearby canyon and they didn’t see anything.

Ben Tedder told the Chronicle he was questioned by police as he was hiking Monday. He told the newspaper he had a feeling something bad had happened.

“To hear that it could’ve just been random is really scary,” he said. “Kids go up there to tag or do graffiti in the tunnel up there, but nothing like this. Stuff like this doesn’t happen around here.”