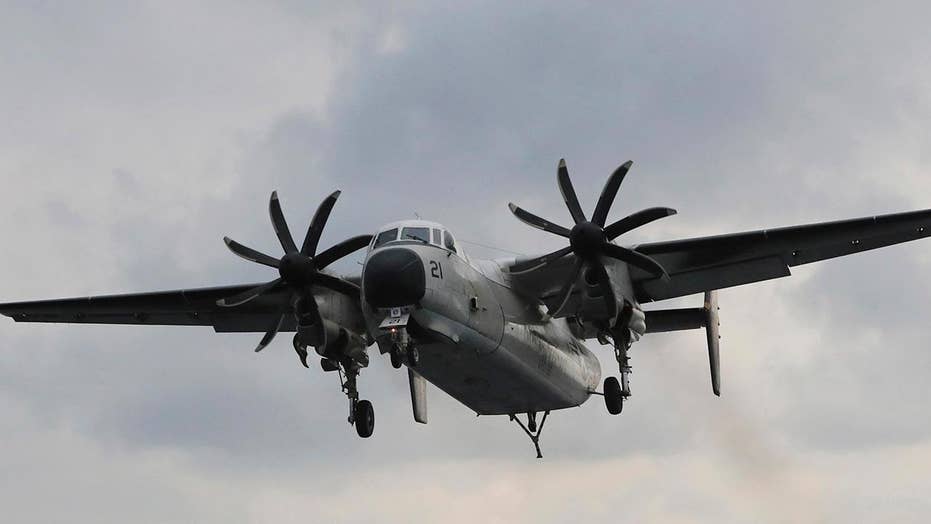 3 missing after Navy plane crashes in the Pacific

A Navy transport crashed on its way to the USS Ronald Reagan.

Three U.S. Navy sailors remained missing Wednesday after a U.S Navy plane crashed in the Philippine Sea shortly after takeoff from Japan, as early indications pointed to an engine failure as the cause of the mishap, multiple defense officials told Fox News.

Eight sailors who were on board the C-2 cargo plane were rescued in "good condition" by U.S. Navy helicopters, according to a statement from the U.S. Navy's 7th fleet. The aircraft crashed about 575 miles southeast of Okinawa as it was heading from Japan to the aircraft carrier USS Ronald Reagan.

The Japanese military is assisting in the recovery of the three who remain missing. The eight personnel who were recovered were found less than an hour after the crash occurred. They are currently being treated on board the aircraft carrier.

The Pentagon said on Wednesday: "We are aware of the incident and it is currently under investigation."

The Navy's C-2 Greyhound is a cargo plane that delivers passengers and supplies to aircraft carriers at sea. It is a very old aircraft, having first entered service in the late 1960s. It is scheduled to be replaced by the V-22 Osprey in the next few years.

Earlier this month, the aircraft carrier USS Ronald Reagan joined two other aircraft carriers off the Korean Peninsula for the first time since the late 60s in a show of force to North Korea. At the time of the plane crash, the carrier was training with the Japanese military.

This is latest accident for the Navy's Japan based 7th fleet and comes after two separate collisions at sea this summer involving guided-missile destroyers USS Fitzgerald and USS John S. McCain, which killed 17 sailors. During the weekend, another US destroyer bumped into a Japanese tugboat after the tug lost propulsion. Nobody was injured.

Fox News’ Ben Brown and The Associated Press contributed to this report.