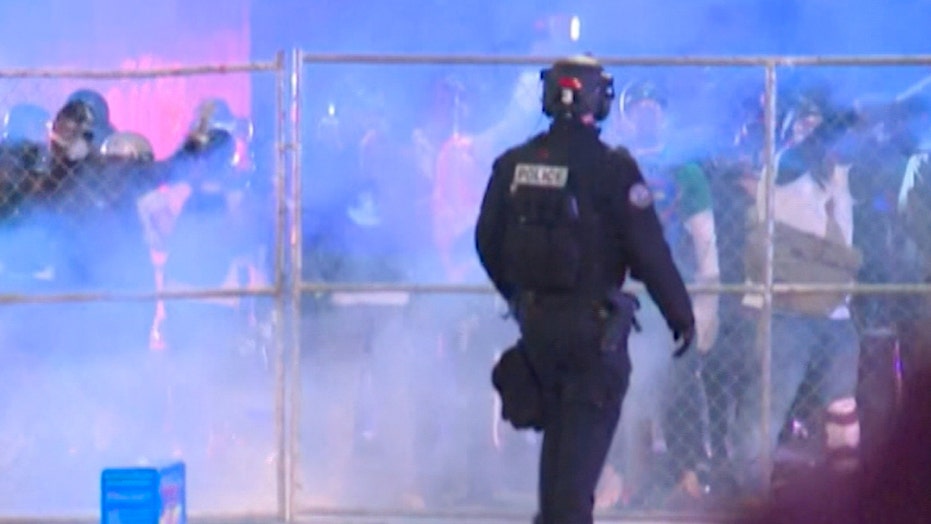 Fox News' Christina Coleman reports on the protests in Portland, Oregon, which have been going for more than two months since the killing of George Floyd in Minneapolis.

Two Portland police officers were hurt on Sunday when rioters used a mortar to hurl fireworks at them during the city’s 74th night of protests, according to officials and photographs released Monday.

Sixteen people were arrested after the night’s events near the Portland Police Association office, where officers declared around 10:10 p.m. that the protest had devolved into a riot, according to updated information released by police Monday morning.

People from the crowd of roughly 200 protesters first began hurling eggs at police before moving on to “commercial grade fireworks,” throwing them at officers who were trying to disperse the crowd, authorities said.

One officer suffered a burn to her neck when her face mask melted, police said, while a sergeant who was standing nearby experienced a leg injury when he was struck by a piece of firework.

Rioters also set at least one fire and used dumpsters and fencing to block the roadway over the course of Sunday night, police said. As a result of the barricaded intersection, at least one ambulance was forced to detour.

The 16 people arrested on Sunday night are believed to range in age from 21 to 46, though police said one woman would not disclose her name or her age.

Protests, and at times riots, have flared in the Oregon city since the police-involved death of George Floyd on May 25.

In July, federal agents were deployed to Portland to guard a federal courthouse that had been damaged by vandals and a fence was erected around the building's perimeter. But the federal law enforcement presence angered protesters and local officials who said they did not want them there.

The agents were later pulled out of the city and replaced by Oregon State Police.