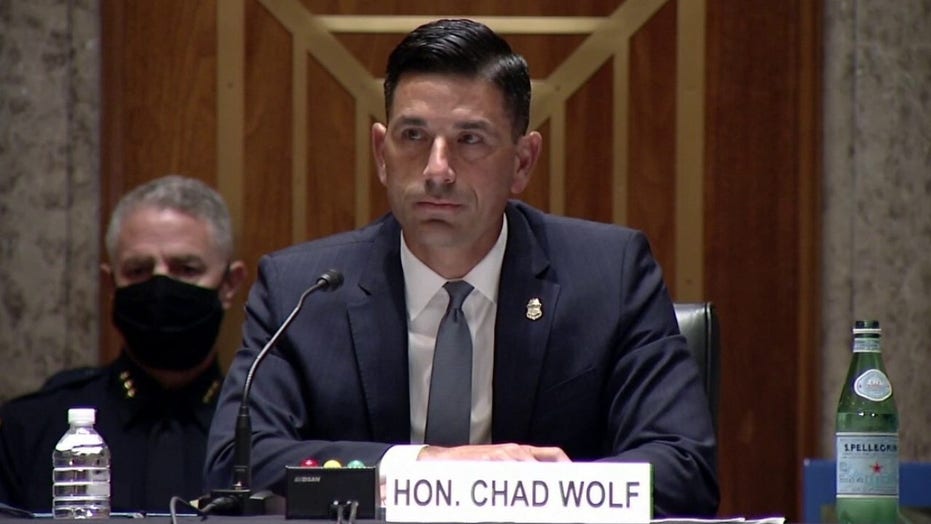 Wolf faces lawmakers' questions on the role of federal agents and how they are handling the riots and protests; Lucas Tomlinson reports from the Pentagon.

More than 65 nights of demonstrations carried on in areas of Portland, Ore., on Thursday night, just hours after the city's mayor decried the unrest that has roiled Portland since George Floyd's death.

A police officer was hurt and at least three elderly people who tried to thwart vandalism attempts were apparently targeted or blocked from doing so, police said early Friday.

Portland police declared an unlawful assembly outside a precinct shortly before 10 p.m. local time, and protesters were ordered to leave. Officials had said earlier they believed the intent of the crowd was to vandalize and burn the precinct.

Shortly thereafter, a group of protesters lit a garbage can on fire using “thank-you notes on blue hearts from community members which were affixed to the front of East Precinct,” police said Friday in an early morning press release. They then allegedly placed the garbage can against the front of the police precinct.

Moments later, as video shows, an elderly woman tried to extinguish the fire but was blocked by someone wearing dark clothing and a helmet.

After one person instructs the woman on how to use the extinguisher, someone can be heard briefly mocking the woman, yelling that putting the fire out was the “highlight of her life,” according to the footage.

As she activates the extinguisher, the person continues to block her from aiming the nozzle at the fire, until the elderly woman is ultimately successful, video shows.

Earlier in the night around 9:45 p.m., shortly after police warned the crowd “not to attempt to break into East Precinct or burn the building,” rioters allegedly began damaging security cameras near the precinct’s front doors. At least one person was able to fully dismantle a camera from its position, police said.

“Several members of the group were spotted with cans of paint which were thrown towards East Precinct,” the press release states. “Two elderly community members attempted to stop the group from vandalizing the building with paint and were subsequently hit with the paint.”

During the mayhem, protesters hurled bottles and rocks at law enforcement. The officer who was hurt was hit by what authorities described as a large rock. The police statement described the officer as “severely hurt” but provided no further details.

Officers worked to clear streets near the precinct, at times running at the crowd to push people away. Smoke canisters were also deployed, news outlets reported. Portland police said some demonstrators in the group laid ties made of rebar in the street that caused damage to police vehicles.

Early Friday, roads near the precinct were closed, police said. “Any persons including members of the press who violate this order will be subject to arrest,” the department said in a tweet.

Authorities said they made 12 arrests were made, including a 17-year-old male. Most were for interfering with a police officer and disorderly conduct

The Pacific Northwest Youth Liberation Front, which advertised the Wednesday rally on social media, used Twitter to announce “round 2” of the same demonstration on Thursday night with the slogan “No cops. No prisons. Total abolition.”

The group, which described itself as a “decentralized network of autonomous youth collectives dedicated to direct action towards total liberation,” did not immediately reply to a request for comment.

The clashes between thousands of protesters and U.S. agents sent by the Trump administration to guard the Mark O. Hatfield Federal Courthouse stopped after an agreement between Gov. Kate Brown, a Democrat, and the U.S. Department of Homeland Security that called for the agents to begin drawing down their presence in Portland’s downtown on July 30.

But after a brief weekend reprieve, protest activity has continued nightly in other parts of the city, with Portland police, local sheriff’s deputies and, in some cases, Oregon State Police troopers on the frontlines as demonstrators demand an end to police funding.

It was one in a handful of times since protests broke out in the city in late May that smaller crowds have targeted police precincts with barricades and fire. A precinct in North Portland, a historically Black neighborhood, the downtown police headquarters and the police union headquarters have also all been focal points for demonstrators who are calling for the defunding of the Portland police.

Federal officers guard the Mark O. Hatfield U.S. Courthouse as a fire lit by protesters burns on the other side of a perimeter fence Saturday, July 25, 2020, in Portland, Ore. (AP Photo/Noah Berger)

Protests have gone on unabated in Portland since May 25 following the death of Floyd, who was Black, in Minneapolis while he was in the custody of police, which prompted national outrage and reckoning in cities across the U.S. against systemic racism and police brutality.

The civil disobedience in the city prompted President Trump to send federal agents from U.S. Customs and Border Protection, U.S. Marshals Service and U.S. Immigration and Customs Enforcement to guard the federal courthouse, which was increasingly targeted in demonstrations that often turned violent.

It was a move intended to quell the unrest but the presence of federal agents instead reinvigorated demonstrators and created a focal point for the protests each night amid concerns that Trump was overstepping the limits of federal police powers.

Federal agents have since moved out of the city, with Oregon State Police taking over.